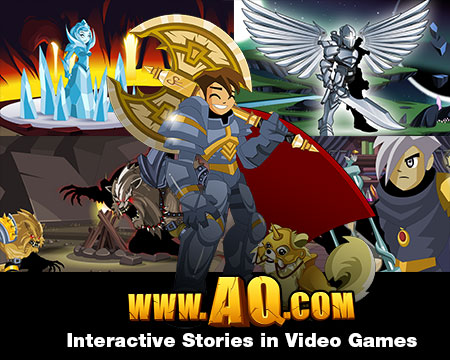 Tomorrow (Friday) morning, I will be speaking at TEDxTampaBay which takes place at the Tampa Musem of Science and Industry. If you are not familiar with the TED talks, you should do some googling! The "x" in the title means it is an independantly run version of the event. There will be about 12 other speakers, all addressing the topic of "The Future of Story telling." I am going to tell the full story of our 1st LIVE event with Voltaire in AQWorlds. Live & special events are pretty common to all of you in our gaming community. But to people who have never heard about our games, the idea of telling a 5-act story, live, with 30,000 playing together, at the same time, and collectively moving the story forward, and having EVERY ONE of the 30,000 players be the main character... well, that is pretty interesting and fun to share! I should be home just in time to join you in all of our new FRIDAY NIGHT game releases :-)

UPDATE!!!! (From After the TEDxTampaBay Event)

WOOOOOW! What a rush. It was sooo cool talking on stage about the Friday the 13th event that we all created and experienced together. There was so much more I wanted to talk about -- but 18 minutes is not a lot of time. I wonder how Voltaire will feel when he finds out that he was a core part of the talk? The highlight of the talk, and what I believe is a "1st" at a TEDx, is my undead attackers were literally BOO'd off the stage after sneak attacking me. (Do we ever have public speaking without unwarrented random real life combat?) 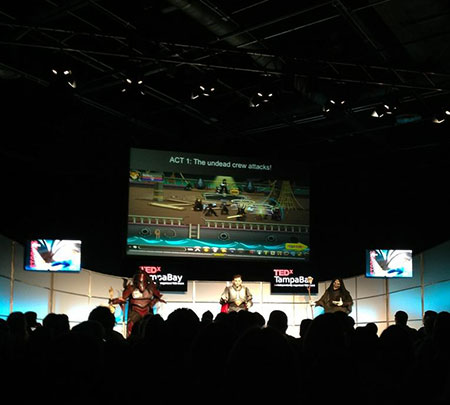 The officials running the event took HD video from 4 seperate cameras. IThey told me the video would be edited and eventually be available to watch... somewhere. I will keep you posted! Until then, I saw that the Pasco Country TV posted an interview they did with us after last week's award ceremony O_O. The guy in the red jacket is "Bobby Rocket" a local personality. I think Bobby is used to being the crazy one in his interviews since he normally interviews government people... I think this was fun for him :-)