It makes the world go 'round or so they say. There are a lot of things that are more important than money but you do need a lot of it to keep a game company going. 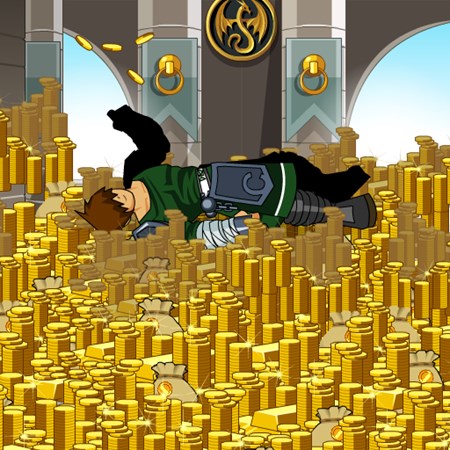 I'm not rich. I'm not poor either but I lease a Nissan Quest minivan (UPDATE: after this post I traded the Quest in for a 2010 Prius to save on gas), I don't own a Lamborghini. I still haven't paid off my student loans. My wife makes clothes for my kids or gets them from the thrift shop or yard sales. If any of our clothes come off the rack, they come off the clearance rack at Target and I'm still broke at the end of the month.

When I was working on AQW there was always a very vocal group of people who thought that I (somehow) personally took home all the money from every AC spent in the game. That I just slept on a bed made of cash. The truth of the matter is that I didn't even get a percentage of AC sales. I work on a fixed salary regardless of how well AQW did or did not do.

I'm not telling you this to get you to take pity on me. I'm telling you what things are really like to try and dispel any illusions that any of us are getting rich off of any of you.

I know it's easy to look at the money that Minecraft or Flappy Bird raked in and think that if you make games, you get rich. But you need to remember that there are literally THOUSANDS of games, maybe TENS of THOUSANDS of games, released every year and almost all of them make no money at all.

SO, where does all that money from Memberships, ACs, DragonCoins, Battle Gems Founder &c go? It goes back into the games. It goes toward paying as many people as AE can to work on the games because without developers, there's no game. I know a lot of people would do this job for free (myself included) but it's nice not having to get another job to support my family so I can try to find time to make games on the side. Very little would get done that way. AE is also very good to its employees so we have very decent medical insurance which is not cheap even for a company as small as ours.

The money goes into the costs of running the games. The servers required for the amount of traffic that our games get are not cheap and they are ALWAYS on.

The money goes into bandwidth. Every time you complete a quest, equip an item, pick a new hair color, say Hi or even move... a small bit of data is sent to the servers, then sent from the servers back to everyone in your room so they can see that you said HI or moved an inch. There are thousands of people playing AQW so every one of those little data transfers add up quickly. Our bandwidth bill is unbelievable... but if we don't pay it... you can't play.

The money goes into advertising. Back in the early days of AQ Classic, the internet was a very different place. There were very few web games so getting people to come and play was cheap and everyone came to play. Now things are different. There are social media sites and a million other games to play online not to mention so many people heading to the consoles and mobile and leaving the web. The price of traffic has grown so much that we can't even afford to advertise in the the major markets where we once swam freely.

Traffic is tricky but I'll try to explain. AQW is a free to play game. Yes, there are significant advantages for people who want to support the game with a Membership or even buying ACs but the game is still free for anyone out there who wants to make an account. Of course most people won't pay for something unless they have to so 98% of every character ever created has never spent a single cent on the game. If you take the 2% that have paid something and the 98% that have not and average them out, you get a very, very, very low Average Revenue Per User (ARPU).

There is organic traffic (as opposed to paid traffic) that comes from people telling their friends over twitter and Facebook (which is why you see so many games with viral components... they are trying to get organic traffic without paying for it) but you can't count on it. It's rarely very effective unless you make freakin' Portal and EVERYONE is talking about it.

Here's the thing about traffic. People leave the game ALL the time and since the players are the ones funding the game, if we don't get more players in... the game dries up.

So making a game, and keeping it alive is very expensive and all the money that you pay AE goes back into the games (except HeroMart items. Those go back into making new HeroMart items). We're not getting rich off you guys. We're just making ends meet THANKS to you guys. We don't have a big name game company throwing money at us like a lot of places. We survive almost ENTIRELY off of you (we get some help from ads and AExtras but it doesn't really even make a dent in our expenses). That's part of why it cheeses me off so badly when someone asks for free stuff. They are essentially asking to be given a chunk of what YOU paid for, and when I say no they just let me know how greedy I am being.

SO, when I say thank you, from the bottom of my heart, for making it possible for us to keep making games for you... i could not mean it more. I hope what I said helps you understand how much I mean that. AE is YOUR company. You built it and you keep it alive. Thank you.