A group of spent the weekend at the lab with the goal of learning how to create mobile games for both Android phones and Apple (iPhone, iPad, iPod) devices! We picked a super simple mini-game to make - which was smart, because we needed to focus on the framework of HOW to build a game that runs on so many devices. Each with their little, detailed, and wicked "gotchas" and picky sizing needs. We decided to create a new version of Doom Cauldron. What is Doom Cauldron!? Some of you may remember it was that mini-game I created a few years ago for a 48 hour game making contest... while I was sick...  running a fever of 104 F.... which explains why so many of the mix and match combinations of the game were so WEIRD! The new mobile version of this game is being created with AQWorlds style art and even gives you an achievement and access to a shop in AQWorlds. Hopefully we will be done with it in another week or two, then we will put out there on the app stores for you to get at the super ultra expensive price of 100% FREE! 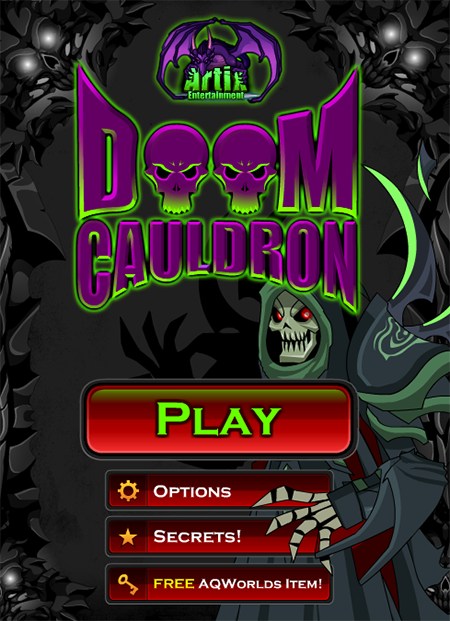 (Coming in a few weeks... we will keep you updated!)

Bonus Story: A pizza delivery guy went waaay out his way on Saturday night to bring food to us at the lab. In addition to a generous tip we gave him an Artix action figure from www.HeroMart.com -- we imagine that was some sort of odd first!

SlyCooperFan1: They already put Bladehaven on the Chrome App Store. I have it downloaded. They'd better be able to make one for Chrome. :P Posted on 1/14/2013 4:57 PM

Pyromanticore: I'm ready to deliver a pizza, but I'll just make sure the staff is ready to show their location to me. lol. BTW what is the in-game prize (aqworlds) of the game? and how do we get it? BTWW Hi artix :D Posted on 1/14/2013 4:57 PM

dayknight: Clarification on the last post: what exactly are we going to be doing in the game? Reply  Posted on 1/14/2013 4:58 PM
Delete  Reply

CloudFlame: hey artix is there anyway to check our account on this site and change a few things with it? Reply  Posted on 1/14/2013 9:05 PM
Delete  Reply

EPIC_NINJA_DUDE: so if you can create monsters can we send our creations o they can be made on the game Reply  Posted on 1/15/2013 5:57 PM
Delete  Reply

Eonaleth: Hi Artix, I was wondering maybe you can have this new version of DoomCaulderon for us who don't have smartphones. Maybe as an app in FB or Google. Would really love to get through this new version and take care. Reply  Posted on 1/16/2013 12:21 AM
Delete  Reply

SPOOOOOON: Will this be available for Windows phones? Cause I don't see myself getting anything with android, nor anything related to the scourge of the technology world, Apple. Reply  Posted on 1/16/2013 12:57 AM
Delete  Reply

Striikeryuz: Artix, will it be available in my country Brunei Darussalam? Please Do... I Really hope you do. Because, In my country, Less than 20 players only play AQW, so, by the way, where do you put your ads? Which megazines? Brand name perhaps, so that maybe if it was sold in my country, I can Introduce the game to my friend. Reply  Posted on 1/17/2013 6:32 AM
Delete  Reply

xerofang: Artix i have a question will it ever be in Latvia?Because here are a lot of aqworlds players. Reply  Posted on 1/18/2013 6:06 AM
Delete  Reply

Darth Necroktus: make a Windows Phone or PC version too. What will I do when I have neither an Iphone or Android? Reply  Posted on 1/20/2013 12:34 PM
Delete  Reply