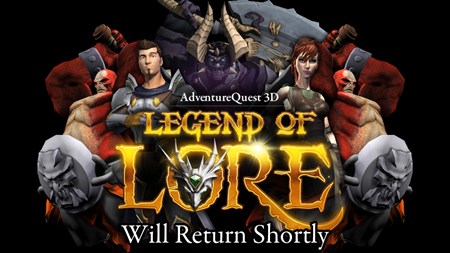 New! New! New! Which is sorta funny because you have not even seen the old stuff O_O. It has been three months since the our 3D Game team "went dark." There has not been so much as a whisper of the teams ultra hard work and effort. Well, I made a ton of Touts and Tweets about it.. but other than that *dramatic pause* there has been... only silence. Players across the world repeatedly checked here and www.AQ3D.com and cried out, "WHEN WILL THE SERVERS BE BACK UP!?" and "WHEN WILL BETA GO LIVE!?" and "CAN I BE A MOD AND HAVE FREE GOLD AND ACS!?!?!?!" (All true... mostly the last one.)  In the 2012 Year in Review post, I gave a brief update of the games progress and plan... and mentioned something about AdventureQuest Worlds Members getting first shot at what is coming next. We have been careful not to announce when that is exactly going to be because we are making some CRAZY HUGE art changes to AdventureQuest 3D art style. Our new game will look original, unique and different from every other MMO. Check back on Monday as we talk about the new art direction and also about the combat system!

YamiKakyuu: I cant believe you guys scrapped the previous models and are starting over, thats amazing! Reply  Posted on 1/4/2013 9:03 PM
Delete  Reply

Runixer: using full-screen mode in a flash player causes disabling of chat input. so yeah you will be able to go fullscreen maybe, but you won't be able to chat while doing it. Posted on 1/4/2013 11:43 PM

xThornius: Runixer, you can't do anything with the keyboard, when using full-screen in a flash player. I've noticed that while playing AQ Worlds on full-screen. You can't even use your number keys to use skills. Also, why can't they just make a flash version, and a Unity player version? Posted on 1/4/2013 11:43 PM

Runixer: "good" and "bad" are both indicated by each and every one of us, so maybe for you yeah, but for others there are tons of games out there that you can't just count all of them as "bad" unless you tried them ALL, and even then some of them might be good for other people. Posted on 1/5/2013 3:15 AM

baculi: if im an artist and i want to give my drawings free no acs no mod just i want to give them at ae cuz im your fan how do i contact u to send the art ill wait reply ......and hope ill be usefull to ae Reply  Posted on 1/5/2013 8:23 AM
Delete  Reply

Runixer: all "official" artists are workers of AE, though for games like AdventureQuest Worlds you can post ideas here: http://forums2.battleon.com/f/tt.asp?forumid=259 Posted on 1/5/2013 8:23 AM

Runixer: Of course members "will get first shot of what is coming next". you said yourself they will because "they pretty much pay for the server cost" so nothing new about this. what IS new is that you are going to change AQ3D's art style wich, no offence, is a pretty good decision. so good luck, keep being awesome, and Battle On! Reply  Posted on 1/5/2013 2:59 PM
Delete  Reply

Lyraxiana: Only Adventure Quest Worlds? Awh. When will it be available to other players? Like Guardians for Adventure Quest Original? Reply  Posted on 1/7/2013 5:27 PM
Delete  Reply

SamX: My membership expires november last year and I can't do any more transaction because of something.... I must earn a lot of artix points. Reply  Posted on 1/14/2013 11:23 AM
Delete  Reply