In the lobby of Artix Entertainment's Secret Underground Lab there is a beautiful black tree, covered in tiny glowing lights, ornamented with anime and video game characters, and topped with a face hugger from the Alien movie series. (What else would you expect at a video game development studio?) Each year, the team gathers under the tree and exchanges presents according to the rules of "Secret Santa-Claws." If you have never heard of this before, read on... this story happened today. 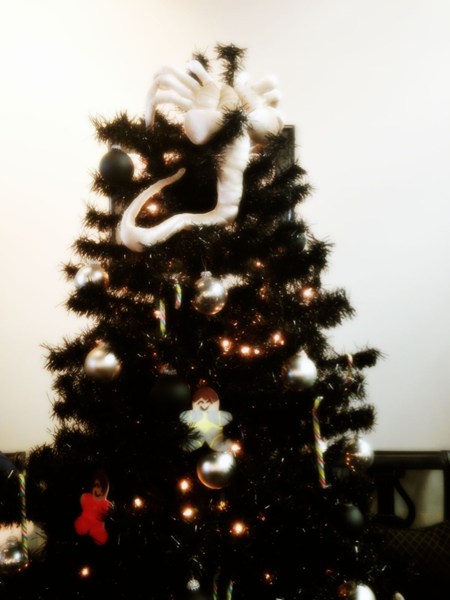 The rules of Secret Santa-Claws are easy. It starts a few weeks prior to the gathering. Everyone randomly draws one name from an upside down helmet. You are not allowed to tell anyone who you got... it is a secret. (It already happened, so I can tell you, this year, I got DragonFable's lead, Geopetal.) There is a limit of $5 with which to buy or create a gift (or prank) for that person. If you would like to read more, and see the best gifts and moments from today, please click the read more button... 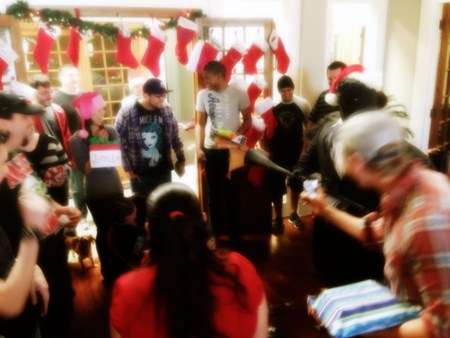 A lot of companies have "mandatory fun" in the form of big, expensive, fancy pants Holiday Parties. Here at Artix Entertainment, we are a wee more humble. We bake and cook dishes at home then bring them to the lab where we turn the HeroMart chamber into a buffet. Zazul's DEATH FIRE DOOM MOUTH KILLER chilli is always a hit. (Mostly the floor, which is where most people end up after one bite.)

We have added 6 new members to the team this year. So this was their first time.... and by all of the smiles everyone had a blast. Many of the gifts were inside jokes, or nerf projectile devices. But there are a few presents worth sharing.... here they are:

A green bag with the Green Lantern logo turned into Cysero's "C" logo. (Little known fact: Cysero's favorite super hero is the Green Lantern.) He does not know who made the gift for him, but they turned a plastic Thor's Hammer into Cysero's Hammer. I would wager a vault full of gold that the first person to shoot him with their new nerf gun is going to get that hammer thrown at their face. (Update: It was me.) 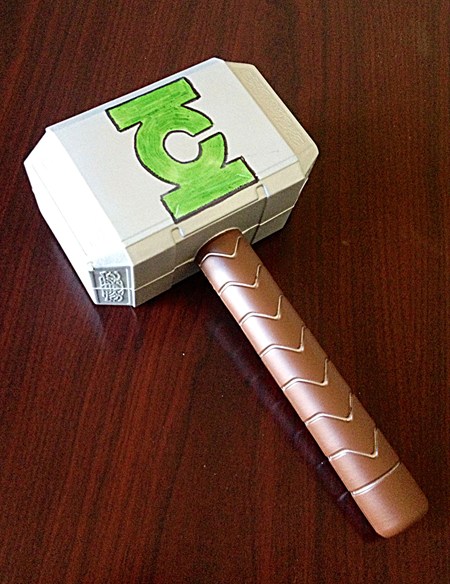 My gift was a bag. A pink bag. It was from Victoria's secret. Filled with pink wrapping paper. And the presents inside were wrapped in pink. Want to guess who gave it to me? *gives Beleen the "stare"* My hands nearly burst into flame as I touched the pink wrapping to open it. But OMG!!!!! She made two adorable Moglin Derplings. They are sooooo cool and stylistic. I love them. 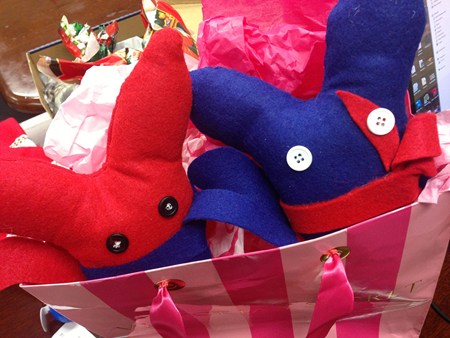 The Underpants of Doyle

One of our newest team members, Draven, who has been doing all of the killer web designs (like this site) has the last name of Doyle. His Secret Santa-Claws, who is yet unknown made him a giant pair of whitey tighty underpants with the word Doyle printed large across the back.

Geopetal's character has always been a rock. Not just any rock, she is the standard DragonFable rock used in background art. We joked that there are nearly 6,000 instances of the rock graphic appearing in DragonFable which makes her the most used character in any of our games. (Not to be confused with the AQWorlds version of Geopetal where we turned her into a statue.) At some point, someone put her as a rock in the game with fake glasses and a nose like a Mr Potato head. So, Geo was surprised to unwrap a Mr Potato head... which someone had taken out the potato part and replaced it with a large well shaped rock and drilled places to put all of the eyes, noses, mouths, ears, arms and feet in. :-) :-) :-) 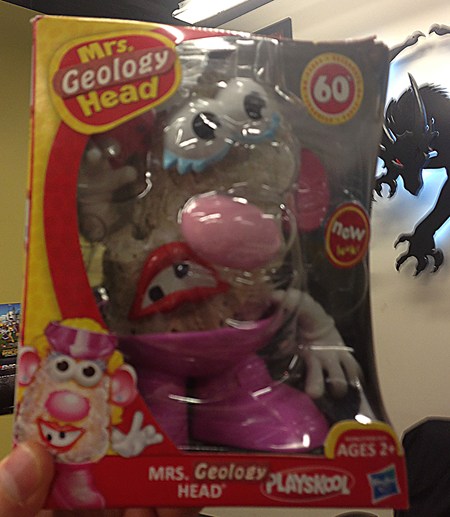 It is the time for giving and forgiving. Even the evil CEOs of corrupt multinational conglomerates plotting to take over the world need a little holiday cheer. So we sent Chairman Platinum a little something from all of us. Labeled "Holiday spices to make everything nicest" we thought, "Awwwww, how nice!" Except the Secret Santa-Claws admitted that he cleverly removed all of the spice and filled it to the brim with Ghost Mushroom Peppers. (not kidding) These peppers are quiet literaly the hottest most vile spicy things on the planet... *_* (We did say Secret Santa-Claws gifts could be pranks, right?) 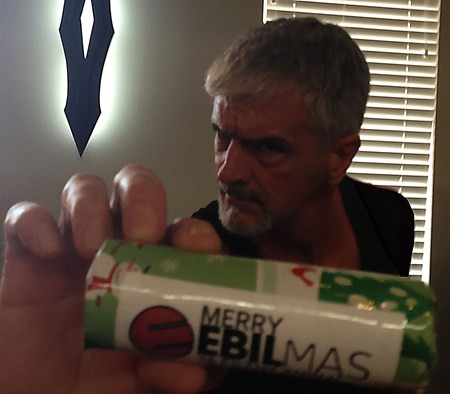 There is a gift under the tree for you too!

But... it will not be delivered until the boxes open inside the games. The weather forcast does not look too good. But you have the opportunity to change all of that. Raise your weapons and defeat the monsters that are coming... save the world... then let us PARTY UNTIL 2013!!!!! 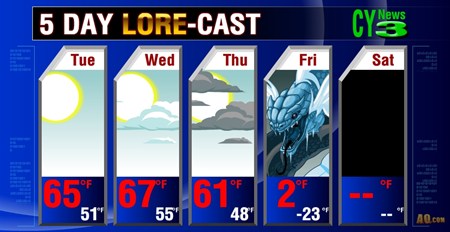 AqwBloodHound: Omg, Looks like you guys are having a Huge amount of Fun! Great tree design and I hope you all have a Merry Christmas ^^ ~ Nathan. Reply  Posted on 12/19/2012 7:02 PM
Delete  Reply

YamiKakyuu: First, black tree = epic. Second, nice Artix and Beleen ornaments! :P Thirdly, the derp Twilly and Zorbak are adorable and props to Beleen for wrapping them in face melting pink on pink on pink. Thanks for sharing this! Reply  Posted on 12/19/2012 8:17 PM
Delete  Reply

bgamer: You know I love you guys and all the other releases but where did AQ3D go I mean we haven't had a article about that in awhile. Reply  Posted on 12/19/2012 9:58 PM
Delete  Reply

Dragonmaster Flynn: Me and my friends are doing a secret santa at our school tomorrow. It's gonna be fun! Love the hammer Artix! Reply  Posted on 12/20/2012 3:28 PM
Delete  Reply

Deimon_Moon: easy, he already have the hammer(or he change something for the hammer) and used the 5 dollars to buy the materials to change it Posted on 12/20/2012 6:06 PM

Hieoratic: Thank you for a great year of fun many more too come artix merry Christmas Reply  Posted on 12/20/2012 7:21 PM
Delete  Reply

Paragonian: Lyric's from the song Knight's of Shame, by AWOLNATION the best band ever! So by the way AE thanks for being smart and not saying the worlds gonna end. Pce guys, Btw party like tommorow were gonna die, cause the new year is coming! PARTY!!!!!!!!!! Posted on 12/21/2012 9:57 PM

Soulsius: unless your a member,there is another way,kezeroth's armor helm cape can be dropped from kezeroth,but it is for members only,plus,it's gonna take some time,the ac version is expensive,but its non-member so you can wear it even if your membership expired,you can even put in the bank for free. Posted on 12/22/2012 6:29 AM

Lyraxiana: I would love to have seen people's faces. I love how everyone at Artix Entertainment loves each other and you all seem like a big family. Just had to say this. I love you guys. Reply  Posted on 12/24/2012 7:56 AM
Delete  Reply