3D redesign of an AdventureQuest Monster

With the 10 year anniversary event, OverSoul and our Mogloween releases, we temporarily took the spotlight off of our 3D game project. But during this silence, the AQ3D team has done incredible work and made progress. The biggest news is, as of last Friday, we have a working combat system! It is not ready for you to help test yet -- but as soon as the animation, pathing & colision bugs are fixed we will be re-opening the servers for all of you AlphaKnights (no ETA, but we are going as fast as we can. Promise!) Meanwhile, would you like to see some of the new monsters that have been made? (There are a lot of them!) 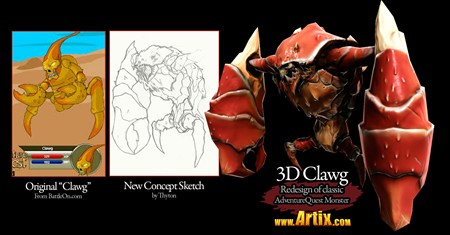 First up is the Clawg. While AQ3D will take place on a new world with a fresh new plot -- it will feature many monsters based on the lore we have created together. The Clawg is a famous monster from classic AdventureQuest. I drew the original Clawg nearly 10 years ago. 6 weeks ago, Thyton re-envisioned it and created a new concept sketch. Xero took the sketch and turned it into the 3D Clawg. I think this new version of the monster sets the tone for how this game will be. Bigger, more dangerous, more mature.

QUESTION: What other classic AdventureQuest monsters would you like to see re-envisioned for AQ3D: Legend of Lore?