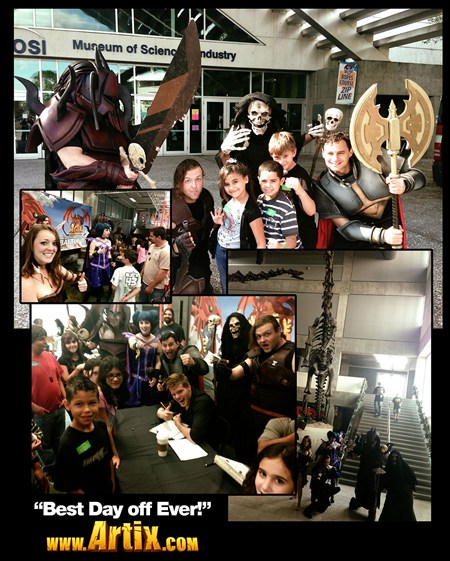 Past Saturday, we went to the MOSI (Tampa's Museum of Science and Industry) to talk to young gamers about making video games. The gaming event was sponsored by Verizon and was called "Press Play". We dressed in our cosplay armors and talked to visitors while Dage & Thyton did drawings by request. LOL, everyone kept asking Thyton to draw pikachu, ponies and unicorns. (Note: Thyton is a "tough guy" that draws hulking, wicked monsters... so it was humorous and inspiring watching him throw aside his machismo and and putting all 110% of his art skill into making cutsy things for the little girls. What a good guy!)  We hope we made a positive impact on the young minds we spoke with... and are not sent any therapy bills for having Sepulchure chase the children while DEATH yelled "It is ok, you will respawn... really!"

KJinx101: @Artix. I would definetly be scared and wonder who's skin is being shown at the arms.... and then he might be real so I would either run, or grab my Dmk armor and upright dragonstaff of destiny. Posted on 11/12/2012 6:18 PM