AdventureQuest Worlds
Cluck-cluck-DOOM is coming to YOU! Chaorruption continues in this week’s newest chapter of The Span saga, loaded with fiery dungeon mazes, legendary heroes, and a… ChickenCow dressed in a TOGA?! If that’s not Chaos then I don’t know what is! /join thespan and discover why you are here… and what your destiny is. But Chaos is slowly infecting your Professor, so you better act fast before he loses control of his sanity AND his knowledge! 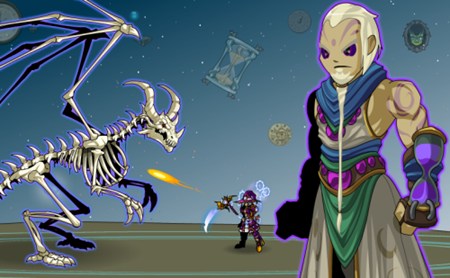 EpicDuel
Happy Birthday Nightwraith! Celebrate this Art Assassin’s leveling up in real life in-game with seasonal rare missions and items from Nightwraith’s personal weapon cache. But you’ll have to fight him to prove your worth! Also, Delta V’s barbers have rendered all the contest-winning hairstyles for a grand total of 42 new ‘dos! There are 7 sets total—one for each class and gender. Rock out your new epic hairstyle! 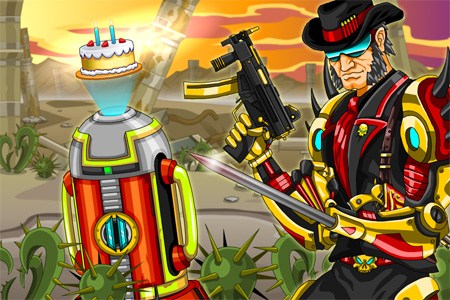 DragonFable
Last call for Trick and Treaters! Embark on the final Mogloween quest by helping four footed friends find their way back to Croft. Cysero’s Superstore is also stocked with 2012 Mogloween masks, so make sure you get ‘em before you lose face… erm, helm.

MechQuest
The Mechas are playing exterminator this week! MechQuest is squashing some technical bugs to help make the game run more smoothly. In the meantime, check out the new Male and Female hairstyles and give yourself a fresh Fall look! Speaking of... you can set up your Frankenmecha OC with a new look! Put together the whole set, starting with the new Frankie Head that boots general damage by +40% for 5 turns, deals double EP DoT, decreases enemy defense by 60 for 5 turns, and a damage NoT of -5% per turn for 5 turns. That’s the perfect way to get a-head in the game! 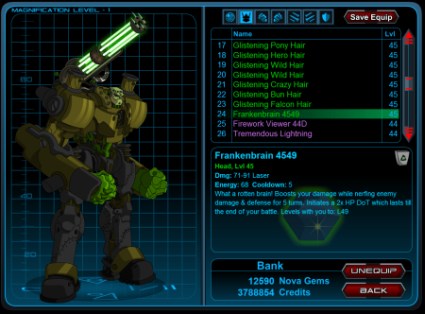 HeroSmash
Take a look at Overlook’s brand-new look! Not only has our hometown gotten a makeover, a bunch of NPCs have gotten fresh new looks too. And a new hero has flown into the scene: Faith from HeroMart! Faith is in charge of HeroMart and HeroSmash promotions while the new HeroMart shop is being built in the City Mall. Faith also has a new shop for players as a thanks for helping us reach 50,000 likes on Facebook. Thanks for being super! 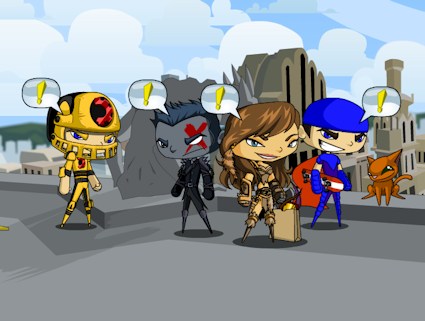 AdventureQuest Classic
Are you brave enough to hunt down The Veil’s mightiest foes? Journey into the new level 100+ zone and score exclusive rewards…if you prove victorious. The Old One also returns to Lore for vacation. Great for him—but not so great for the rest of the planet! Gear up in the new Demon Warrior Armor with the 12,000 Z-Token Package and stop the ensuing chaos and some very odd followers known as Neko Waifers!

kabimarta1: Great release, as usual! It's a shame we're not able to replay cutscenes through our BoL anymore thanks to that overhaul you guys gave it. Even the cutscenes from previous events were removed from the BoL. Reply  Posted on 11/9/2012 9:20 PM
Delete  Reply

kabimarta1: The AQW release is really great, I can't wait to see more of the Span, and I'm looking forward to the Skyguard finale next week.

The only thing that disappoints me is that we're not able to replay cutscenes through the Book of Lore anymore thanks to the overhaul you guys gave it. Other than that, the overhaul itself is simply amazing. I just wish we could replay cutscenes from the exclusive rare events such as birthday events and such through the book again. Reply  Posted on 11/10/2012 12:24 PM
Delete  Reply

SlyCooperFan1: I've still barely done anything in The Span. I should probably get started on that pretty soon. Reply  Posted on 11/10/2012 1:36 PM
Delete  Reply

Ark_Zong: When is HeroSmash gona get a real update besides a shop, I mean a NEW update not Pump-Con which you guys basically took last years and put it up again, Also the AQW Book of Lore is reaaaaaaaly glitched up, the AQW update is still awesome though. Battle on! (battle the glitches too!) Reply  Posted on 11/10/2012 7:48 PM
Delete  Reply

Malzahar: Lol Well AQW I need To ask something ...J6 is it your b-day? lol Because in Hyperium there is a J6 B-day Party Helm Well Idk HAPPY BIRTHDAY and All the New releases ROCK I LOVE AQW :3 I finished all The Span things I want the Thief Of Ages class when it comes im still rank 6 tho :/ Reply  Posted on 11/12/2012 10:01 PM
Delete  Reply