AQW Heroes Pay Their Debts... And this week, Death is coming to collect! When Death decides that he wants YOUR life, you  agree to spend 72 hours filling his role so that he can experience what being a Hero is like. Learn how to rule the  Underworld... and see just how well Death fills the role of a Hero. Open the Xhar Morghuil, the book of things which should  not be named, but must not be forgotten and decide... Will you take back your mortality? Don't forget that October is the month for 4th Upholders! If you upgrade any time during October, you'll automatically be a  4th Upholder, gain TWO Chaotic Starswords, an achievement badge, and BIG bragging rights! If you have an upgrade which  expires ON or AFTER November 1st, 2012, you are already a 4th Upholder! It is ALSO the month of Mogloween! Head to /mogloween to play our spooktastic release.
www.AQ.com

The Chairman believes that you must dress for success.  He proved that last week with his armor, but this week he's bringing 18 new EbilCorp styles (3 for each class and gender)!  Can't decide which style to use? Purchase the new 4-key package that permanently unlocks 20 styles for each class and gender, including the sinister new EbilCorp styles! 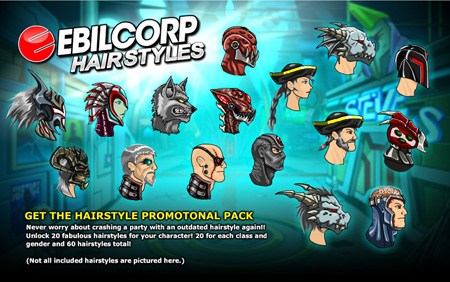 Log in now to catch up on past Mogloween stories! The Storybook is now available through the quest log. Can you get all the past masks before Croft reappears this year?
www.DragonFable.com

MechQuest is 5 years old, and to celebrate, the Floorivator at Tek's Mechs has been fixed! Ride downstairs to the party! New this week - alongside your Wrapped Nubertrons, you can pick up accuracy-boosting Candle mods! Also - Star Captains can pick up high level Vintage models of the Volt Thorn mechas for Nova Gems.
www.MechQuest.com

It's Taco Day! Scamp's Groceries has added some new stock for Taco Day: some items are permanent and some are rare, but you should check them all out!
www.HeroSmash.com

The city of Talados was once a beautiful island kingdom, the population extremely gifted in the art of psionics. But one day, that civilization fell to the might of a gargantuan abomination - an abomination named CARNAX! Carnax was eventually defeated, but the destroyed city sunk to the depths below. Now lying in ruins, you must journey through the remains to hunt for the pieces of the Taladosian set! Physically hunt -- that's right we are resurrecting the walk-around quest from the olden days of LORE! Also be sure to check out the new FallTide Dagger in the Limited-Time Shop, only available for the month of October!
www.BattleOn.com

grayfoxrunning: I would love to try the other games but just a little scared to step up, lol. Waiting for Mogloween and more testing in AQ3D. Reply  Posted on 10/6/2012 10:22 AM
Delete  Reply

Magma Proof: I need help on aqw death custene. I finished the first 2 quests, but where do i go after that?


The community thing is really short sighting the community could you possibly add a bit more? Reply  Posted on 10/6/2012 8:55 PM
Delete  Reply