I wonder how many people get the reference in the subtitle above. I used that because it is an actual line that was voice acted from tomorrow's AQWorlds Friday the 13th Event. The line is a parody of "Do you feel lucky, punk?" which is a meme originating in the famous movie, "Dirty Harry" starring Clint Eastwood. You know... from back in the days where no one knew what a meme was... and  if you said the word "internet" people probably thought you were talking about the inside of an actual net. If you have no idea what I am talking about, here is a link to the original "Do you feel lucky, punk?" scene on YouTube (PG13.) So tomorrow, when you hear Deady say the parody line, it will be 13.13% extra special. 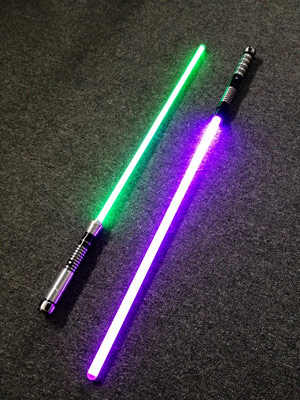 has been a big week. In addition to our upcoming releases, we had HeroSmash volunteer artist Polistar visit the lab. He came all the way from Canada!  Earlier today, to show our gratitude to Yorumi for all the hard programming work and fixes ongoing in AQWorlds, we (Cysero, Alina & I) custom ordered a replica lightsaber from Ultrasabers in his favorite color and presented it to him in an ultra geeky, surprise, light saber gifting ceremony. We even played the Starwars medal ceremony song... hey, how come Chewy did not get a medal? OMG! While I as typing this... Yergen was walking down the hall, staring at the laptop he was carrying, not paying attention, made a sudden turn, missed the door, and walked right into the giant glass wall-window seperating my room from the hall. O_O  He is fine. Nothing broke. But just to be safe, you should tongue-in-cheek message him "Beware of windows!" on his twitter @YergenAE . Yergen is working on the icons for the AQ3D interface. Finally, you may have heard on DragonFable's Design Notes... a new "Secret Underground Lab Plague" has started. When one of us gets sick... we all end up getting sick. Over the past 2 weeks I have had a sinus infection, strep throat, and I would like to count the embarrasing ordeal that happened this morning as a result of not reading the giant "NOT TO BE TAKEN WITH ANTACIDS" warning on my medication. That was an unfourtunate science experiment. Currently Rolith is working from home sick. We should have some sort of poll to see who gets sick next and award points to people who get it right. *makes note to add poll functionality to the new Artix.com* BATTLE *coughs* ON!

dekoander: wow derp for yergen and i met polistar in herosmash we talked for like an hour he is really cool you got youself a good teamthere :0 Ndietank, INYUTANK Reply  Posted on 7/12/2012 6:14 PM
Delete  Reply

: Man this is going to be so awesome, i love volitare events! The last one didn't really attract my attention but this one looks like its going to be awesome. Reply  Posted on 7/12/2012 9:50 PM
Delete  Reply

_negachin_: Lol I didn't know the scene from Dirty Harry, but I thought it was from the movie "The Mask" he says the same thing, only the movie was released a lot later than Dirty Harry.
Here's a link : http://www.youtube.com/watch?feature=fvwrel&NR=1&v=vkqnAh_5ODw
And get well soon! :D
Reply  Posted on 7/14/2012 7:34 AM
Delete  Reply