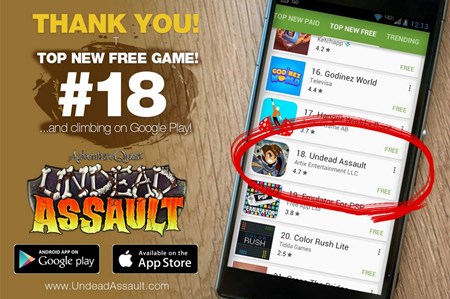 Our gratitude to all of you who got and rated our new game, it is climbing its way up the charts! That simple action you took is making a real difference.
If you haven't tried Undead Assault, our new infinite runner mobile game, you can get it now for Android and Apple devices at www.UndeadAssault.com!
See what other players are saying:
Absolutely love it! I downloaded this as soon as I woke up this morning and I haven't stopped playing it since. It’s addicting and can be quite challenging at times. I love it. 5 star rating from me :D - Justin Serina

This game is awesome!!! It's about time we have a running game that also does other things instead of just running lol! - Julio Miranda

Good ol' Undead Slaying Fun I was ecstatic when it was announced that Undead Assault would release this afternoon at noon; "I can get it before I go to college!" Boy, I wasn't disappointed. Explosions, Undead Dragons, and TONS of rad unlockables! I'm pretty confident that I'll be playing the heck out of this between classes. :') Thanks for another great game, Artix Entertainment. - Z. Cantrall