Yesterday we launched our newest mobile game, the infinite runner - Undead Assault! Get it at www.UndeadAssault.com now and let the undead slaying begin! Then share the game with your friends and give us a 5 star review on the app store if you like it! (Buying the 3X Gold Multiplier also unlocks the Daimyo pet in the mobile game and the Artix's Golden Paladin gear in AQWorlds!) 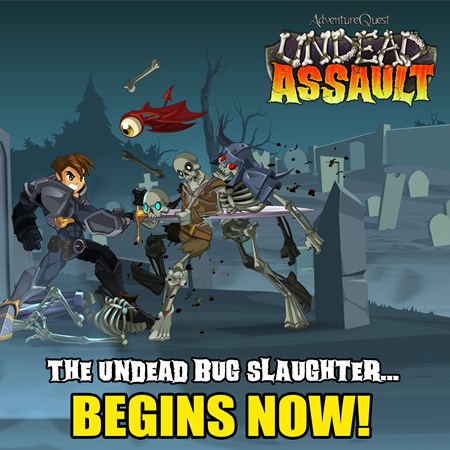 While YOU take on legions of the undead, Kraken (the lead coder) is wielding his battle-axe to slaughter some of the bug reports we have received.*

If you have been experiencing any bugs while playing Undead Assault, read on to see what will be fixed in the next patch:

These patches should be out on Android devices tomorrow if all goes well and on Apple as soon as they put the patch live. **

For everyone on Tab and Note devices, we haven't forgotten you!  Kraken is addressing core bugs first, and then he has some ideas for how to optimize the game to improve your performance. That will take time but he DOES have ideas on how to give your game a boost!

* ACHIEVEMENT UNLOCKED: Undead Assault had the fewest bug reports upon release - AWESOME job by the alpha testers! (If you would like to help us test our mobile games in the future, keep an eye on the Design Notes to see when we are hunting for more testing help!)

** As with all updates to our mobile games on Apple devices, we cannot control how quickly Apple publishes the updates, but we will let you know as soon as we see they are live!