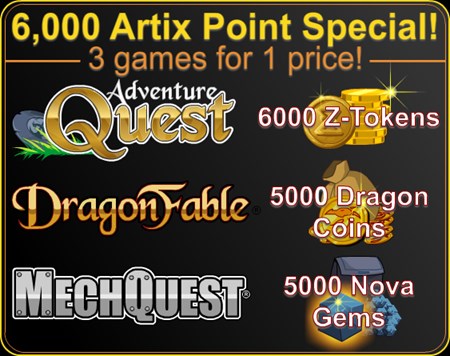 That's right! The AdventureQuest, DragonFable, and MechQuest teams have joined forces to bring you a triple-game crossover event that links their lore... and could spell disaster for Lore! Ashendal, of the MechQuest and DragonFable teams, writes:

The Shadowscythe have many plans. Some have succeeded immediately, others take many centuries to play out. One such plan was put into motion thousands of years ago, before The Reset, as a way to test how they could corrupt and control the minds of those below them. What would lead them to learn how to create the powerful Doom Weapons, and even the dreaded DoomKnights, began with a simple discovery. This Friday, see how the corruption of a group of Vizalain’s could spell disaster for Lore!

In Mechquest see how the original plan took shape and try to purge the Corruption from innocent creatures!

In Dragonfable learn how one missed passageway means the Shadowscythe's plan could continue long after they got the results they wanted and what it will mean for Lore!

In AdventureQuest see what would happen if left untouched and try and stem the tide of an army of corrupted creatures swarming out of the Dwarfhold Mountains on a mission to spread the tide of darkness to all corners of Lore!

Do you have what it takes to stop the Corruption and save Lore? Or will this mean our final hour of free will and the victory the Shadowscythe have long wanted?