Over the weekend, you had the chance to vote on the AE staff member that you most wanted to ask some questions. After the voting closed half an hour ago, we tallied up the votes and EpicDuel's TITAN won, edging out Stratos by a hair. 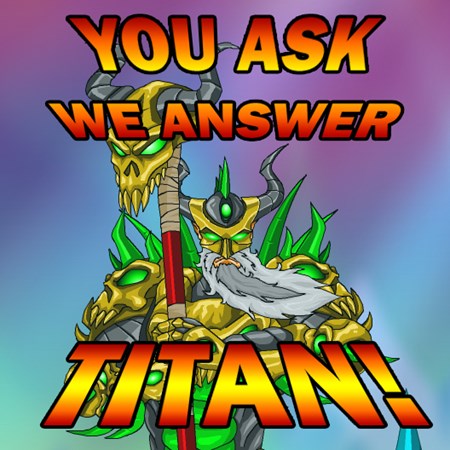 So, from now until Noon EST on Wednesday, July 30th (NOW CLOSED) you may post your questions in the comments section below.

Remember that you can ask whatever you like, be it about the game, his experience as a developer, his personal experiences or his beard (EDIT: There are a few exceptions. If you are just using the Q&A to try to complain instead of actually ask a question, it will be deleted. This includes complaints that are being disguised as questions. If you're asking Titan questions about other AE games, those will be deleted since he doesn't know the answers. People not asking questions but just saying "Hi Titan" will have their comments deleted)... but he gets to pick what he will answer and what he won't. Your Artix.com name will be used in the post with the questions and answers which I will post on Thursday, assuming Titan has time to answer them that day.

Remember that you can be serious or silly (I always encourage silly) but rude questions won't even get approved. This is a real chance to get to know Titan a little better and to ask some questions that you might never to go ask otherwise. Don't waste your chance on trying to sound cool like trolls do.

Keep it SHORT as you can. TL;DR rule is in effect.

Keep it FUN. This is not a gripe session, it's a Q&A. If you have a serious question it will be entertained but a few people are saying that they have questions then just posting complaints without asking anything relevant. Others are posting complaints in the weak disguise of questions. Those are being deleted.