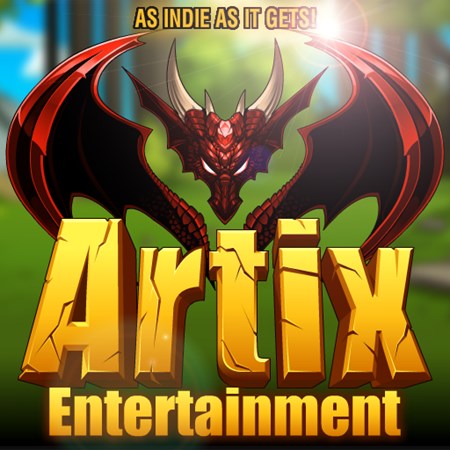 That's a tough question. There's no formal definition for what qualifies something as indie. For the answer, I say we look to the word it self. Indie is short for independent.

In these terms, and indie game studio is one that does not have a large parent corporation funding it (or, in some cases, owning it).

AE is an indie game company. It has been since before the term "indie game" was a common phrase in gaming. We are not owned by some larger company, which is owned by some even larger company which is, in turn, a subsidiary of the Walt Disney Company. Artix Entertainiment (specifically Artix himself) owns Artix Entertainment and nearly all of our funding (aside from the little we get from ads) comes from you guys (see: MONEY).

In that sense, YOU own AE. We're just here to make the games you play and to make sure that you don't ruin the studio by granting some good-hearted but totally unreasonable request like "free everything for everyone all the time!" which would send AE crashing back into the nothingness from whence it came in record time. Then you would own nothing. Also, we would be unemployed.

Being an indie company has some serious advantages like the freedom to pursue any game concept or a direction that we want. It means that we can take risks on ideas that would get shot down if we were owned by a larger company which was ONLY concerned with appealing to the top of the bell graph. It also has some drawbacks like the lack of big, protective financial arms to cuddle you if you fall down (or sell you for scraps if you screw up too badly). I think the greatest advantage that it provides is the ability to get closer to you guys because we're free to listen to you guys instead of only listening to the market research and focus groups. Those are useful tools, not to be ignored... but it lacks heart.

Some people seem to think that AE is some large heartless company for one reason or another and more often than not it's because we're not responding to your tweet or e-mail (or not responding fast enough). It gives some of you the impression that since we didn't have the time to reply to you, that we don't care.

I, personally, have 67,000 Twitter followers. I get rather a lot of tweets for one guy. Most of the day I keep my Twitter tab open and I try to reply as often as I can for reasons that I have mentioned before. However, there are whole weekends when I don't even open Twitter and instead play blocks with my kids  go on an adventure with my wife or play disc golf with my best friend or fix my hot water heater. I'm sorry that you're experiencing whatever issue you are experiencing but, as much as I try to stay connected, I'm not a tweet-bot. Other AE staff don't even keep their Twitter tabs open during the workday since they find it distracting, preffering instead to focus entirely on doing their jobs (I consider tweeting part of mine).

Maybe you got banned and don't know why. Nobody is responding to your tweet so you decide to contact Player Support (good idea but that's the FIRST thing that you should have done) and maybe it'll be a few days before they can reply that you were banned because you were caught harassing someone, or because you were offering to trade accounts or maybe you were playing on a shared account or breaking some other rule.

Because we do not have a parent company footing the bills for us, Player Support is not large. A full-time team of 3 and a part time team of 3 more because that's the best that we can do at the moment. Between these 6 people, they go through about 10,000 e-mails and a few hundred phone calls per week, each one of them is a player needing some kind of help. They can't possibly reply to each of them personally so they have copy pasta replies for the most common issues, but they read EACH ONE and do their very best to help the person with the information that they have provided. The more information provided, the better chance that you will get help and they will get to you as soon as humanly possible. But they are human.

So please understand, we're not ignoring you. Well, sometimes we're ignoring you. If someone is telling me that something is broken and needs my attention, I'm probably not going to take the time to respond to trolls or rude people or people saying "HI!" or translating tweets that aren't in my native language, or telling you a tenth time that I can't get your account back and you need to talk to Player Support since THEY deal with all account issues (this one happens a LOT). But generally we're not ignoring you.

We're just a small indie company, doing the best we can to keep the games coming and help you out. Thanks for being patient with us.

(ADDITIONAL: Hancok pointed out that Mods are also part of the Player Support team, and there are a great many more than 6 of them, but as they only deal with in-game moderation and do not deal with any of the Support e-mails or phone calls they do not apply in this instance)

Kylestien: In that sense, YOU own AE. In that case mind if I, as your guys boss, get you to keep thinking up ways to try and support the forgotten games? I don't want to give up on them. I'm making it a number 5 priority, just below keeping the company alive, making games, being awesome, trying to invent time travel and plotting world domination. Reply  Posted on 7/17/2014 4:38 PM
Delete  Reply

Ellonnah: And when you do get to reply or say hey or give someone a birthday shout-out, it really does mean the world to us players! Thank you for all that you do to keep "our" company afloat. AE rocks so much. I wish some players were a bit more appreciative of all you do. Oh well, I guess you just can't please everyone. Much love, always! Reply  Posted on 7/17/2014 4:39 PM
Delete  Reply

Kokujoe: Quite insightful yet again. Never knew about the player support being this small, and still they manage to do a fantastic job while they're at it; possibly every single day! You're a reasonably wise person, and its obvious that young kids look forward to instant solutions to their queries from you. But as you mentioned earlier it would do them so good if they actually try looking at the customer/tech/billing support a lot than ranting about about it on social media. While replying to each and every lil' query is not humanly possible, but I do comprehend Reply  Posted on 7/17/2014 5:04 PM
Delete  Reply

HancokUndead: On the subject of Moderators not being a direct part of the Player Support team... perhaps they should be? The ones that live in/around the Tampa Bay area, that is. I suppose it would mean that they would then become paid employees as opposed to just being volunteers, but that area of the company has been understaffed for quite a while. It's not my place to say whether or not it'd be a good investment to do so, but it is something to consider, if it hasn't already been considered. Reply  Posted on 7/17/2014 5:04 PM
Delete  Reply

Cysero: To my knowledge, there are no local mods. Aside from that, the in-house Player Support team have to have access to every database in the game and a lot of payment info as well. We are serious about our security and giving that to even well meaning volunteers (like the Mod staff) is a big No-No. Posted on 7/17/2014 5:04 PM

Iwillsmashu: Cysero have you ever thought about having volunteer Player Support Staff? I mean there is some people who can help handle the Email Spam, and leave mainly phone calls to the payed staff. Reply  Posted on 7/18/2014 10:16 AM
Delete  Reply

Cysero: Can't be done. In order to help the players, someone needs access to all of the game databases to be able to change and alter accounts at will to fix them and also access to private information like payment info. Not something we are willing to trust to unpaid staff, no matter how well intentioned they are. Posted on 7/18/2014 10:16 AM

Iwillsmashu: Oh that makes a lot of sense. Sorry I was just making suggestions. I'm actually attempting to become a moderator for AQWorlds, I don't think I did a good job when I sent my application last time though. But, Better will come and fill the positions as needed. Posted on 7/18/2014 10:16 AM

DerpSonic: I knew the word "indie" meant independence from other companies, but I didn't know the word was actually short for independence (learn somethin' new everyday). I believe I've read something like this before, but it will be really good for other players to read. We appreciate the honesty! Oh, and you're welcome. Reply  Posted on 7/18/2014 10:16 AM
Delete  Reply

Gandalf1197: So, I have a question. I know that you guys are highly, personally involved in the creation and maintenance of all of your games. So, here it is: Do you guy have your own characters in games, like AQWorlds, and do you, like, play said games, to check bugs, run tests, and test overall gameplay? Reply  Posted on 7/18/2014 10:17 AM
Delete  Reply

AErules: hey cy! i havent really but keeping up on ideas sorry :( BUT in regard to klyestein's post if u ever invent time travel let me know! unless its in something lame like a phone booth (lol I bet u can tell its a reference to Doctor Who and as a matter affact I love it, just went to a doctor who party at my local library :D) anyway the only reason why im commenting is cuz a post by u will probably be noticed by u, and I wanted to tell you that I just do NOT tell u enough how much I love AE!!!!!!! U PPL ARE ALL SO NICE AND AWESOME!!!!!!!!!!!!!!!!!!!!!! Reply  Posted on 7/19/2014 11:40 PM
Delete  Reply