When you're making a game, there are a lot of things to consider. How fun it is, the platform or platforms for which it is being developed, how you are going to get traffic, how to fairly monetize the game without cheating your players or short changing yourself. But one of the major things that people forget about is the power of Social Media. 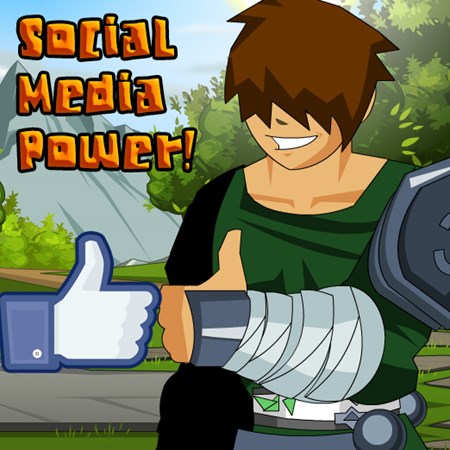 You can use Social Media for a lot more than just advertising. For example, when we were making Battle Gems we decided to use Facebook Connect as a bridge so you could save you progress across platforms.

This won't be possible for all of our games, but it worked out that time. Connecting to Facebook in Battle Gems also lets you see how your friends are doing on the game and even fight them in the upcoming recently released PvP update.

Facebook logins also make it much simpler for a lot of the world to log in and try a game without going through the process of registering. Just click Facebook Login and BAM, you're playing.

So, why did we use Facebook instead of our Artix.com logins? It's all about the numbers. Here are some facts about Facebook.

Just think about those numbers for a second. If we had used our own Artix.com login instead of Facebook we would be missing out on about 1.27999999 billion possible new players. If the "average Teen" posts a Photo Op on their wall, that's showing Battle Gems to an average of 300 people.

Personally, I really like Twitter. Just the other day over my Twitter someone mentioned how he couldn't believe that he was taking directly to his favorite AE dev. Twitter has enabled fast, short and direct contact between people who once seemed unreachable. For me, that is a VERY important fact. I have always been a fan of how directly we have stayed in touch with you guys and community outreach is part of my job (also, why I write these posts).

Most of the AE staff use their Twitter account for far more than just letting you know about updates but also use it to gather data on bugs, get feedback on works in progress or releases or just to say Hi and keep in touch with the community, one person at a time. That is an AMAZINGLY powerful tool!

Of course, when you have 67,000 followers, you get a few thousands tweets a day and it's impossible to respond to all of them but I try to as often as I am able, which is pretty often considering the 140 character limit on a Tweet. I know that I respond to more tweets than any other AE Dev but that's just because I make it a priority. The other Devs are there and even if they don't respond, they read your tweets. Now some Twitter Stats.

These numbers are STAGGERING, guys. They are MIND BLOWING and any game developer who doesn't use Social Media to their advantage is missing the bus. It's VERY time consuming so even if you have to bring on a Social Media Manager (Beleen has become ours) then you should try to do so.

Here are a few tips to help your game get the most out of Social Media.
As always, I hope this helps shed some light on why we do the things that we do. I also hope this helps you up and coming developers to make your game the biggest success it can be.

YamiKakyuu: I totally agree with what you said about Twitter. That was my first opportunity to talk directly to staff and when you guys replied, it was like, "wow, I'm talking to game staff". Feeling never got old and it still doesn't. I still dont know many games where the Devs are as open as AE social media-wise. It's been fun to see it evolve from just a player to staff in my case :) Reply  Posted on 7/2/2014 1:56 PM
Delete  Reply

Gjappy: The more Social Media activity for a game company the better it seems! Reply  Posted on 7/2/2014 1:57 PM
Delete  Reply

Kokujoe: In short, reaching out to one's target audience via social media will make sure that the game gets the user frequency that it deserves. Reply  Posted on 7/2/2014 2:59 PM
Delete  Reply

Cysero: Not exactly. It won't make sure, but a social media presence helps since that is where most of your potential users hang out. But also consider the other uses I mentioned. Posted on 7/2/2014 2:59 PM

SMGS: Hi Cysero, thanks for writing this (and all the other posts you've made). They're definitely good reads. I've posted much of my thoughts on the way AE uses social media on the Artix Reddit, including the fact that Twitter was likely the perfect storm for AE. I have two concerns about how it is being used, though. Firstly, how does the forum maintain relevance knowing that many of the developers use Twitter over their official discussion platform? Many have jumped ship, opting to just tweet the revs because they are ASSURED their concern is read. The EpicDuel forums are slowly crumbling in usage because of this. Second concern is the way in which some staff have used social media to contact each other about work related matters. It seems a bit odd, sometimes unprofessional, for one staff member to be publicly making a query to another. Should there not be a more private means for staff to communicate easily? Here is an example of what I mean, not to out the individual and put them on the spot - because I've seen this occurring many times now. http://forums2.battleon.com/f/fb.asp?m=21466112 Reply  Posted on 7/3/2014 10:17 AM
Delete  Reply

Cysero: I understand your concerns. Twitter's success has enabled direct communication much more efficiently than the forums every provided. Facebook's and Twitter's user friendly interfaces have made contests much simpler to run. In those respects the forums have become a vestigial appendage. It happens when something better comes along (example: the telegraph). But there are still areas where the forum handles things better than social media sites, such as player suggestions. I STILL direct players with suggestions fo the forums nearly daily. It's the best way for us to chronicle and keep track of ideas and suggestions. Frankly, the forums are very old and the spaghetti code that has balled up over the years is probably a nightmare for Captain to continually slice through. Some of the DEVs think that the forums need to be cut altogether but the majority of us think that they deserve a total overhaul that would make things much smoother and simpler (a lot like the comments section on this post). As to communication, we generally use Skype for core members of AE but allowing every Mod and AK access to message us during the work day would dramatically cut into our ability to get anything done which is why the moderation community at large are encouraged to pass messages to us through the filter of the Community Leaders. Doesn't always work that way (as in your example) but I think that Alina's taking the time to answer the question ANYWAY speaks toward our dedication to keeping the lines of communication between the players (and AKs) and staff as open as possible which may not come across as professional but we hope that it is appreciated by those in the know. Honestly, we're not a terribly professional group anyway. I walk around work barefoot. Posted on 7/3/2014 10:17 AM

SMGS: Thanks for the response. I feel as though the areas that make the forum relevant have failed to move on, while everything else has. Discussions have become a limiting factor because of what is seen as a too organized system. 'Everything about this event must go here' - if people are talking about the competition in a war, why should that be tossed in with discussion about the storyline. Off topic posts have also been generally a no-go zone despite, from many other communities, seeing that off-topic content (to a certain degree) brings out some of the best discussion. Second concern about the forums is the failure to properly utilize the faction/guild/clan forums. Honestly, it is, in my opinion, a huge disservice to the community to have such a broken system that has existed since I've been a member of the forums. EpicDuel factions have failed to achieve even 100 threads in the last 3 years, whereas the old EpicDuel forums (before the merger in 2010) contained close to 600 threads. Regarding the communications thing, my perception of that is ArchKnights, Moderators and volunteers have to contact developers the same way players do. I appreciate that the questions were addressed by Alina in the example, but I think the process could be improved. Eukara has the position of "Head of Game Liaison" which leads me to believe there are people tasked with streamlining communication. Hopefully this area could be improved. Posted on 7/3/2014 10:17 AM

SMGS: I think this comment system does not take long walls of texts well. Mine got deleted, will try to keep this one briefer... To put this up top, thanks for responding. All responses in EpicDuel point of view. I should have pointed out earlier that I am a former volunteer, an AK and a Tester. I feel as though the Forums have slowly failed to meet expectations over the years and have failed to move on. I see the forum having three things going for it - Discussion, Clans (Factions, Guildes, Houses, Paxia, etc.), and Suggestions. Discussion: the threads on reddit.com/r/artix have been more constructive than any threads I've seen on the EpicDuel forums in months. Clans: less than 50 factions created a thread in three years, old forums had close to 500. Suggestions: there's no other place for this. I've seen ED devs take suggestions on Twitter. This is the only thing keeping the forums running because there's no place to turn to. For the communication point, my perception as a player (not as a former volunteer) is that the way in which AKs contact developers is the same way regular players do. It sends the wrong message, and professionalism was probably not the right word to use earlier, knowing AE and all. So what is the purpose of the game liaisons, then? They are, after all described as people who "are the bridge between the forums and the Game Staff, as the Game Staff might not notice everything that happens on the forums." Should this not be used more effectively? Posted on 7/3/2014 10:17 AM

Primerose05: Hey Cysero, how much do you like internet power and social power? And do you like Instagram,twitter or facebook better? Reply  Posted on 7/7/2014 9:49 AM
Delete  Reply