Hey guys. Today I wanted to share something with you. I posted this on my Twitter once but I wanted to discuss it a little more. During one of our longer Game Lead meetings I was thinking about what elements a perfect game would have and jotted down a list on the napkin under Artix's cup of tea. 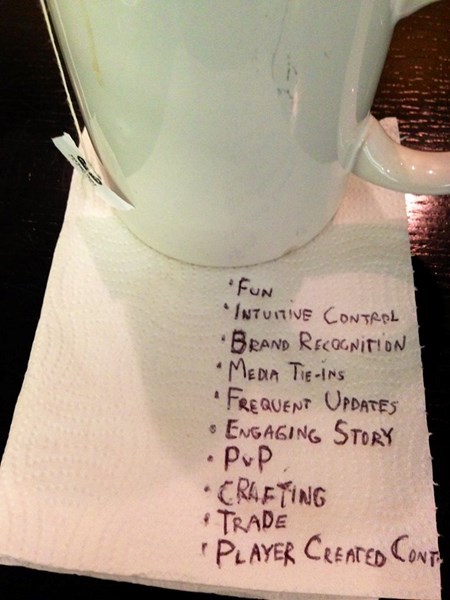 Keep in mind that this is a HUGE list making a game with every element, perfectly balanced with the rest of the game would likely takes YEARS of development.

This one seems obvious but sometimes when you're making a game you get so wrapped up in trying to make the flow natural and adding all the sweet visuals that you actually have to step back and seriously ask yourself "Will this be fun?". It's a game, after all. If it ain't fun then you're doin' it wrong.

Playing the game needs to be intuitive. This means making and tweaking UIs (User interfaces) until every button is where you would very naturally expect it to be. It needs to be very useful giving the player immediate access to whatever they want without being cluttered, which is a challenge. If you put your JUMP button where everyone else puts there INVENTORY button, you'd better have an excellent reason or your game will get frustrating and bomb.

This one only comes into play if you already have a recognizable brand. Mickey Mouse is one of the most recognized brands in the world. If he didn't appear on the cover of EVERY Kingdom Hearts game then someone screwed up. If you have a character, or logo or art style that has a following, USE IT! Give the people what they want.

This is stuff like a TV show or a line of plushies or a line of clothing. It seems like selling out but really what it does is it gives your game credibility. Pokemon is a great franchise but it also has had several cartoon series that developed fan followings of their own and pulled people into the game. When people see a Happy Meal featuring a toy based on your game, they might want to check it out. Plus, how freakin' cool would an AdventureQuest cartoon be?!

Once upon a time you could just release a video game, put it on the shelves then move on yo making your new game. Those days are over. People nearly INFINITE choices of what to play. If you grabbed their interest, that is great. But if they play all the content and get bored, they leave. Adding new content frequently keeps people coming back for more while you pull new people in. It doesn't have to be weekly like most of our games but the more frequent the better.

Engaging doesn't mean complicated. If you look at most of the great stories, they are very simple. Goku, Luke Skywalker, Frodo Baggins, Harry Potter, Superman, King Arthur (and so many more young heroes) start a journey, discovering secrets of great power being lead and taught by a wise, older figure (Master Roshi, Obi-Wan, Gandalf, Dumbledore, Jor-El, Merlin). If you really look there are only about 5 different story types out there being told over and over. You just have to tell it well and get your players invested in the character. When they care about the world you've given them, then you've got something really special.

People love to complete. It doesn't have to be fighting, it could just be comparing collections or beating each other's top score but PvP makes a game that might otherwise be boring, a different experience each time. It also provides a new challenge for the player to overcome which keeps them engaged and invested. It takes a really light touch to properly balance PvP but when you've got a well balanced PvP game, then people will come to compete.

This is once of those things that makes a game deeper without making it more complicated. If you just have running quests and killing monsters, the game gets boring to the people who have been there for a while. Things like crafting let them change their personal gameplay experience, provides a time-sink that will keep them logged in and coming back and adds something to the game to make it deeper for those who want to feel like there is more to the world that you've made than just killing 100 wolves for Farmer Sven. Achievements also fall under the same category of making a game deeper. It gives players additional goals and provides a feeling of accomplishment.

This is something I wish that we could add to AQW but I really don't think we will ever be able to for a lot of reasons. Trade (like PvP) is one of those things that takes a static game and turns into a living, breathing entity all of its own. A thriving trade economy can (and has in several games) actually become the backbone of the game, and the main reason that people keep playing it long after they have lost interest in the story. Also like PvP, it takes an unimaginable amount of work to balance the entire world economy. People will also look for the fastest way to earn currency in the game, but if you have a well balanced game economy, the answer will not be obvious.

Minecraft. What could be better than seeing the thing you made right there on the screen?! In an ideal situation, it's very easy. The cream rises to the top, as they say, and some people might wear the wonky armor that a first-time artists creates but... the better the content, the more people will like it. The good stuff will become more popular, the bad stuff will fade away and this raises everyone's game. It makes content creators try harder to meet the competition eye to eye. it also provides a personal touch to a game that limited customization can't touch.

I'm not saying that every game needs all of these things to be a success. In some cases, it only needs one done very well. Counter-Strike has survived for DECADES on just being an excellent PvP franchise. However, If I had the time and funding, I would build a game with all of these in it and I am pretty sure that this game would be a hit. Notice that I didn't put sweet graphics anywhere on the list. A pretty game is pretty and sometimes downright beautiful but there are SO many great, amazingly fun, engaging, addiction, multi-million dollar games out there that are not much to look at.

What would you put in your dream game?

dragonmaker: just one question, why cant you put trading in aqw i am not begging for it, aqw is already a wonderful game but why not, it doesnt have to be a complete economy but just player to player trading where people can trae thins no matter what the value Reply  Posted on 6/26/2014 4:24 PM
Delete  Reply

PyrodudeIN: Well think about this. Imagine somebody gets rank 10 in a rep faction, and they buy the class. They could just give someone the class and buy it again. Nobody would have to actually earn rank 10 anymore. Or for another example, if a monster drops something, it drops for every player. A person could bring many alternate accounts in to the fight and trade themselves the item every time they sell it and get tons of money. Or if someones account got hacked, all of their items could be stolen and given to another account. These are just a few of the reasons why it could not be implemented in AQW. Maybe it could be implemented in the next game they make. But the way AQW is set up would require quite a bit or balancing in order to put in trading. Posted on 6/26/2014 4:24 PM

Gjappy: @Dragonmaker, because unfortunately players keep getting scammed. And if they have their items being traded away that would be hell for both them and Player Support. Reply  Posted on 6/26/2014 5:55 PM
Delete  Reply

dragonmaker: ohhh i see how that could make things verydifficult, thank you for clearing that up Posted on 6/26/2014 5:55 PM

DerpSonic: ...What I put into MY dream game? ...You'll have to give me a couple of years for me to make a decent answer for that one. Probably the right combination of the things you've just mentioned. By the way, excellent point, PyrodudeIN! Reply  Posted on 7/5/2014 2:12 PM
Delete  Reply