NOBODY WANTS TO MAKE YOUR GAME.

(I know how that sounds but read the whole post before you get all butthurt about it.) 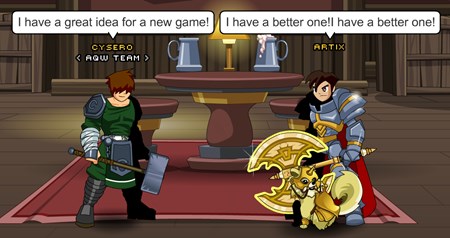 I can't even tell people at parties what I really do for work anymore. If I do, I spend the rest of the party being followed around being pitched game ideas by complete strangers. I lie and tell them that I'm a middle manager at an industrial adhesive company that produces glues for (mostly) binding school textbooks to their covers and other industrial applications.

Don't get me wrong, I love talking about game design and game theory as well as listening to and encouraging people's creativity. The reason that nobody wants to make your game is that the people with the skills to make games already have ideas of their own.

I know that you think that your game idea is totally the best ever and it would be a lot of fun (and maybe you're RIGHT) but game developers think the same thing about THEIR game ideas, so naturally... given the choice between your idea and theirs... they will make their game.

It's a problem with a very simple and obvious solution. All it takes is the will to do with most people won't do and learn how to make games for yourself! It has LITERALLY never been easier. There are SO many resources out there for aspiring game developers. YouTube tutorials on everything from animation or programming, access game engines of every kind for DIRT cheap (Unreal for $10 a month? Cry Engine for $30? That is INSANE), not to mention books. Mountains of books about game design stacked so high that you can't even see the top.

You don't have to learn how to do everything yourself (although I suggest it). Maybe you've got an artistically talented friend who is willing to team up and do all the art and animation while you learn C# or Unity.

The point is (TLDR version)... if you have a game idea, you should pursue your dream! Don't thrust your ideas on someone who is already pursuing theirs. I learned how and I'm a lazy idiot! If I can become a game developer, there is no reason that you can't.

Make the next big game YOURSELF!

grayfoxrunning: My friend,you have no idea what this game sight has done for me. My wife and I are in our 70s and she is a total shut in, so that makes me somewhat the same. You people have given me hours upon hours of relaxing fun. For this I thank you all. The reason I stopped by in the first place is that I played D&D with my boys in the late 70s. This old man thinks that you are doing just great. Keep up the good work of making my day. God bless you all. Reply  Posted on 6/25/2014 10:54 AM
Delete  Reply

dragonmaker: cysero you are not a n idiot (altough im not sure about lazy) you are a lzy GENIUS your and all AE's game ideas are superb so keep it up Reply  Posted on 6/26/2014 4:29 PM
Delete  Reply