Interview with a Cosplayer #1

Cosplay is the hobby of creating and dressing up as characters from video games, movies, TV and comic books. It has become main stream in recent years, largely due to the success of popular fan conventions including ComicCon and DragonCon. The creavity, hard work and effort that goes into creating these costumes is simply incredible. So when Fuge, an AQWorlds player posted photos of his self-crafted Paladin armor on my Facebook page... I asked Fuge if we could interview him to get you the inside story.

Greetings and salutations! We would like to know more about you. What is your in-game name and how long have you been playing Artix Entertainment games?

"Hello heroes, my name is Thao Phuong Nguyen and I’m from HoChiMinh city, Vietnam. Fuge ( in Japanese pronounce )  is a common nickname that everyone call me. I’m 19 years old and I studying at University of Pedagogy as a french department’ s student, by day, and by night I’m a designer and artist, mostly tradistional is my way of art . All of my time surrounding by school works, but not all of them, I still have some spare times to do with my most passionate hobbies : drawing, gamming, and of course, crafting cosplay costumes. I started cosplay since 2009 and most of my cosplay has an anime/manga theme, and I kind of keep it aside for a while because of the senior year of high school, then I rejoined the cosplay word in the middle of  2013 until now. I’m not a famous cosplayer but all my friends also my family always support my work."

"In AQW, my in-game name is Kamiko Hosuda. I played a lot of Artix Entertainement games since 2008 and the first game I played is the original : AdventureQuest, then curiosity drag me to play more of AE games such as MechQuest, DragonFable, EpicDuel…sadly I forgot those accounts TTwTT~~." 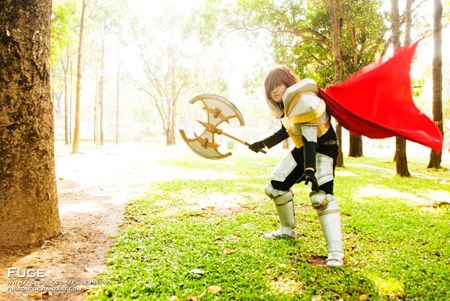 Your Paladin Armor is amazing! What inspired you to make it?

"Since I played AQW, lots of armors are mind-blowing with all colors and forms, but  Paladin is my most favourite class, also the hero who’s own this class, Artix . Paladin armor is very impressive although it doesn’t have a lot of detail like all the latest armors. The amazing part is the chest plate, the gold lines in each armor’s part and the best of it:  the red cape, always classic but never gets old ( Red is my favourite color ) . Also as I see, the Paladin armor keep it design in all of the AE games, and I never forget the amazing skills of a paladin in every battle. So that, keep my head straight on making the armor ^^."

"Beside AQW is epic and amazing game, not much player in my country but I bet they want to saw something “epic” ,and it is worth to have a cosplay from this game ^^ !" 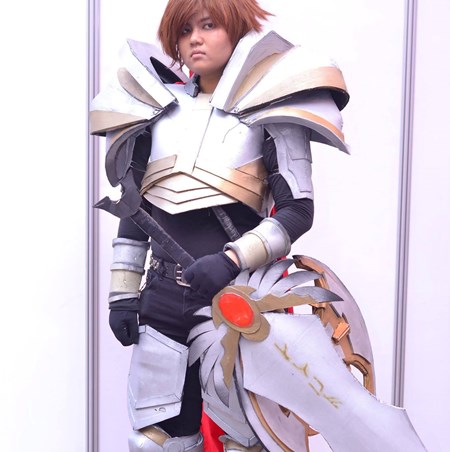 Do you go to a lot of conventions?

"Yes, I go to a lot of conventions . In Vietnam, cosplay is just a new theme of hobbies so not much conventions has been organize in my city. In fact, some of the first conventions had received some negative critiques and thoughts from the locals as they said is a new type of “ expensive and freaky” hobby, but now, not anymore. ^^" 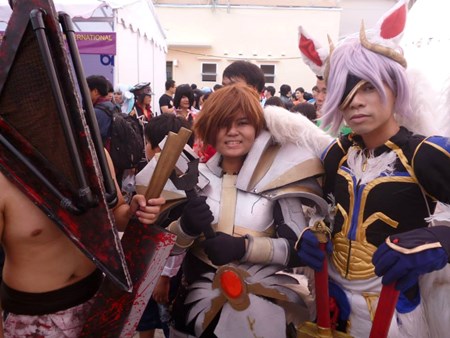 What is it like going to a convention dressed in Paladin armor?

"Well when I dressed as a Paladin,the first thing coming out of my head is” WOW, I DID IT, I WEARING AN ARMOR THAT’S MADE BY MY OWN HAND !” Is a joyful yet awesome feeling that’s I always felt when I weared the costume in, as an artist myself I always happy when I done my drawing or my design work. Also, that feeling is make me proud of myself and keep me motivate for my next cosplay."

"Second...is HOT! (OMG! ). (excuse me ) Allow me to explain a bit : as I said on the top, not much conventions has been organize, the truth is we don’t have enough finances to make it big, by mean we can only rent a cheap place to make a convention and nowhere else than an outdoor ground, but still is too small for a great amount of people who’re join in . So, the armor is hot enough, and sometime I have to move through the sea of people makes me like I’m walking while bathing in my mobile sauna room =]]]."

"Is not important what I think, is how I have fun with my Paladin cosplay. When I go to a convention, everyone is saying  “Wow!”  out loud, ask me for taking picture with them and how I do my armor and have a nice conversation with me. The other cosplayers also have fun with me too, they want to have a picture with me posing as we battle each other. Load and load of fun !" 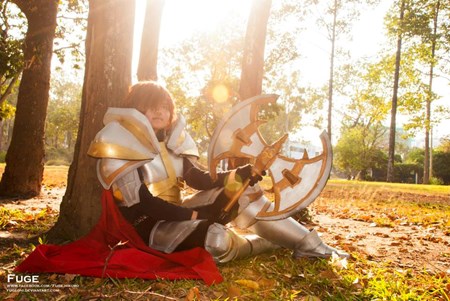 Many of our players would love to learn how to make their own armor. Can you tell any of the secrets of how you created yours? Any tips on getting started?

"In my experiences, making armor always involve in one friendly material : foam, and for full detail is polystyrene foam sheet . The tips for making a good and study armor lies in the thick of the foam sheet. As for making part like chest plat, pauldron, elbow. Knee,…. I use foam sheet with the thickness of 0.5 inches ( 1cm ), never make it too thick or you will have a hard time  with breathing, I recommend the maximum thickness is 2 cm. Now he bending job, is when you use heat for bending the foam to get in shape. For heating I always use a torch lighter, is safer than a lighter ( I got burn several time with it ), I have to move the torch around the bending area or the foam will burn . If you not a fan of fire, a table lamp is the optional and good. But whatever they way you choose, heating job is dangerous if you don’t do it right so be careful. About glue, I use metal glue ( in Vietnam we have a common name for this type of glue is 502 glue hehe ), strongly bound the foam pieces together but don’t breave when the chemical reaction happen with white smoke fly out ( is not good to smell that ) . I sometime use plastic glue, with the glue gun, but IS A BAD IDEA in my place because this glue will melt with the heat when I’m in a convention ( I think indoor convention with conditioners is fine with these glue around )"

"If you’re a starter, sketch on paper is very VERY important, if you do something wrong with the foam sheet is a big of waste and beside, you can fix many of time on the paper if the pattern doesn’t fit your plan. Might take you some times but be patience, you will happy with your result. "

"Of course, if you were a kid and you reading this post, paper, PVA glue is your bestest friends for making an armor ^^. Try it out !" 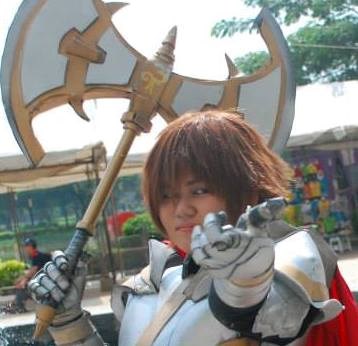 Are there any other AE inspired armors you want to do in the future?

"Yes, the Dragon Slayer armor and Tomix’s SoulWeaver armor is in my favorite list ^^, you can say that the armor I like lies on the awesome of the wearer, Galanoth and Tomix XD, I acknowledge their story, not on wiki, is by playing their quest ( in DragonFable), truth me, you don’t want to see me when I’m played it  . I plan to make the Dragon Slayer armor first, why ? Cuz I want to try the challenging work of the helmet *evil laugh* and the chest plate is amazing. Tomix’s SoulWeaver ? The weaver gloves brings attention to me right after I see it, I not a fan of  light armor but I can’t denied the beautiful of that armor XD ." 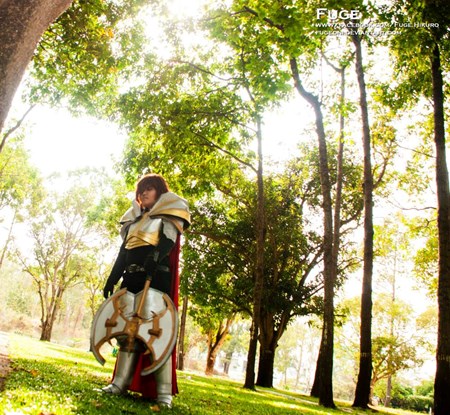 What can we look forward to seeing next?

"I wanna thank you every heroes who’re support me and contact me, especially you sir Artix, your messages is my motivation for making more and more armor . Thank you thank you so much TTwTT. To be . I wish you and all heroes have a wonderful time in the world of AE."

Zereldo: That really is cool, and the tips are nice too. Although most of the armours I'd want to make are fabric and would be different to make. Reply  Posted on 3/12/2014 6:35 PM
Delete  Reply

DerpSonic: Dude!1 I never would've guessed that it was polystyrene!! The weapons look AWEsome too! Congratz, Fuge! Reply  Posted on 3/13/2014 3:14 AM
Delete  Reply

ShukokaiAJ: That is an amazing outfit. Fuge said he wished to make Dragonslayer and Tomix's Soulweaver. I believe they'll be just as epic, as this! And the detailing on the weapons have perfectly matched those in-game. I'm in Awe... Well done! :D Reply  Posted on 3/13/2014 3:56 AM
Delete  Reply