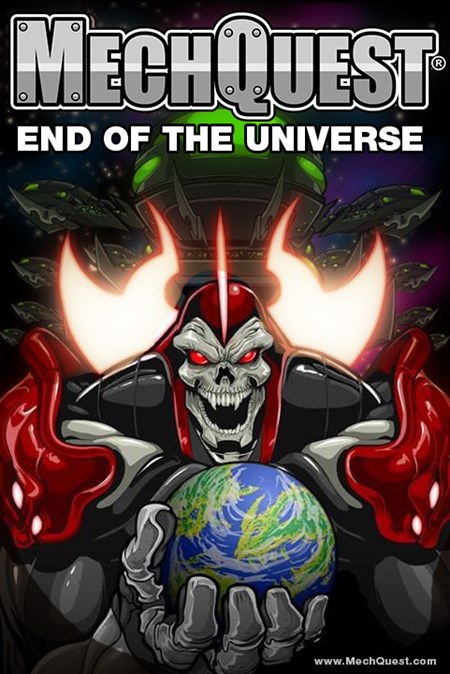 For 4.5+ years, Mecha pilots have been waiting for the answer to one question: "How does the sci-fi, giant robot game of MechQuest take place thousands of years BEFORE the fantasy sword and scorcery game of DragonFable?" The only way to find out is to play MechQuest's unbelievable final storyline release this Friday!

The behind the scenes info is always my favorite part of the design notes. I like to share honest and bizzare stories with you. MechQuest... has a lot of these stories. It is one of my favorite games of all time. I love giant robots. Well, any type of robots and mecha. As a young boy I dreamed of piloting a giant war machine against an unstoppable army of alien invaders. To be the last hope for humanity... *thinks* ... actually.. I just wanted to fire super huge lasers and crazy missles making things go EXPLODERGHEDDONBOOM! I feel that the end of MechQuest will make anyone who is like minded happy.
DragonFable was super popular when we started tossing around the idea for MechQuest. If you were not with us in the "old days" you might not know that DragonFable was a pre-quel to our original hit game, AdventureQuest. yup, DragonFable takes place 5 years before AdventureQuest. We thought it would be ABSOLUTELY HALLARIOUS to have MechQuest take place 5,000 years earlier.
So the time of our games goes like this....

We came up with a reason why.

Actually, we came up with the reason why FIRST.

When writing a story you only need to know one thing: The End. We dropped some jaws during the end of DragonFable nearly two years ago. A very small handful of players figured out what was happening, but the masses were blown away by the twist. The team felt really good. A lot of players asked with surprise, "Did you guys really have this planned the whole time?"

There is a lot of pretty challenging content to get through in order to reach the end of MechQuest. The team and I decided that anyone who upgrades to Star Captain can immediatley access the 4-part finale if they choose to. We did this because... well, we WANT super fans of the game to actually experience the end of the game. The entire main stoyline, as promised is free, and any player can play all the way through to the end of the game.
The main villain of the MechQuest is Lord Valoth. He gets less screen time than any other villain in the history of our games. This is due to the fact that he is on the Shadowscythe command ship with the elite forces. He has conquered countless Galaxys and other planes of existance. In MechQuest, the Shadowscythe are still darkness creatures... but they are a lot more like the borg crossed with aliens. They assimilate what they destory. Which is why most Shadowscythe mecha, ships, and troops look similiar to other civilizations we encountered during our travels. Well, there are shadowscythe that look like things we have never seen elsewhere. It is assumed those entire races of beings were destoryed and assimilated.
When an enemy this powerful does not just instakill your world, it probably means they are after something else. In the finale, we will see why our world is so important.
Attention all Mecha Pilots. This is not a drill. Proceed to your battle mecha immediately and prepare for combat. Tomorrow... your actions will determine the fate of humanity.
P.S. Join us at the MetroCon convention in Tampa, FL, on Saturday at 11am to talk about the end of MechQuest.
ok
Sorry Comments are now closed for this post.

Stewfish: I never played through the main stories of dragonfable, AQ, or mechquest I feel like I've missed a great story ;~; Reply  Posted on 7/25/2013 7:37 PM
Delete  Reply

polko: even thought the last two mission were very difficult, i very much enjoy the ending of mechquest. it is crazy to think that a game four years in the making is finale over. thanks for giving a great game a decent ending with crazy plot quiz. Reply  Posted on 7/27/2013 12:37 AM
Delete  Reply

MarioDM481: ugh i dont think ill be able to reach the end i keep battling they give me level 4 monsters (im level 4) and i still always end up dying then again i have the first mech Reply  Posted on 7/29/2013 12:28 PM
Delete  Reply

Gobna: There are still unanswered questions. I mean what happened to Xaria the ex-leader of House wolfbalde? What happened to the shards that Jemini stole? The shards were suppose to become an ultimate weapon to use against the Shadowscythe. Pls MQ team answer me pls. Reply  Posted on 7/29/2013 6:05 PM
Delete  Reply