Behind the scenes of AQWorld's new release

The rain pouring down on the lab can be heard between the booming thunder. Fitting, that it is storming on the release day of AdventureQuest World's  "The Vault of Endless Doom." The dungeon is 2,000+ lines of custom code, 70+ rooms, 15+ cutscenes, and promises to bring the focus on game back to our favorite game. That is, the entire release is entirely free content. A pretty big deal as the prize of the dungeon is rumored to be the "HeroBlade -- the most powerful weapon in the world." For the past few weeks, players have been getting bits and pieces of lore including stories about Raxgore the Unkillable. The hulking boss monster of the dungeon who lives up to his name. He cannot be killed by weapons, magic, posion or the elements. There is also Binky the magical man-eating unicorn who exists purely to attack unlucky heros who fall through the dungeon's pit traps. There are some other fantastic creatures in there that we cannot talk about (no spoilers!) Grimskull and his assistant Mort are eager to see people get to what is being called "the evilist room ever." Despite being one of the largest, most complicated releases we have done yet... the two-part dungeon only uses only a few of the crazy number of trap and puzzle concepts. Which means if players "love this release to death", there could be A LOT more Grimskull dungeons in the future. 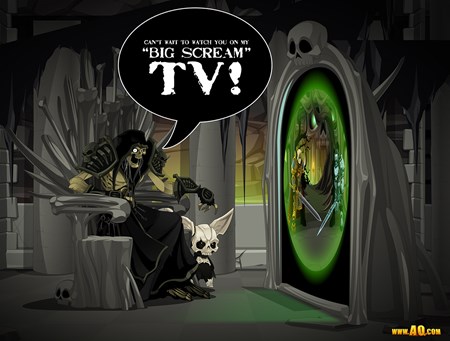 Dungeon Inspector's "Code Violations"
Those of you who have been following the news on this release already know that it was a lot more work than our small team expected.  From the traps to the SCORRORBOARD (Grimskull's highscore board which counts the deaths of EVERYONE who goes splat in the dungeon), Dumoose and Yorumi deserve massive kudos and applause for their sleepless nights of coding. Even though we pushed the release back a week, it was still barely enough time. Actually, as I am writing this, Dumoose is still coding the final rooms. The puzzle rooms are built around the same concept as AdventureQuest3D's interactive objects. Except, the infrastructure does not exist in AQWorlds... so the only way to do this was to build each lever, button, door, secret door, trap and program it individually. One of my favorite parts of the dungeon are the monsters that change your character's size when you slay them.

Director's "Cut"
Ghost's cutscenes are absolutely hallarious. That is, if you enjoy watching yourself meet a horrible and grizzly demise.... and then being laughed at. *dramatic pause* We feel that people are really going to love hating Grimskull. J6 created the backgrounds and art for the traps. The dungeon reminds me of the things I loved about DoomWood. It is always exciting to see what is going to be in the next room. A lot of work went into this release from all of the AQWorlds team.

One Secret... just for you.
Just for reading this design notes post I am going to give you a secret to remember. When you are not sure which lever to pull... walk around and pay attention to the sounds when you approach the lever. And if you ever find yourself in a room with TOO MANY choices of levers, buttons an switches that will all likely kill you.... use your mouse to look around for a secret alternative. (Dungeon Diving 101)

May the fates favor thy adventure into this dungeon frought with peril!

Zapdroid: I hope there will be some kind of armor that matches with the Grimsblight! Reply  Posted on 6/21/2013 2:45 PM
Delete  Reply

daneil: i really need help with ghost king monster at the end of the dungeon but the raxgore thing was HILARIOS grimskull was really mad Reply  Posted on 6/27/2013 5:13 PM
Delete  Reply