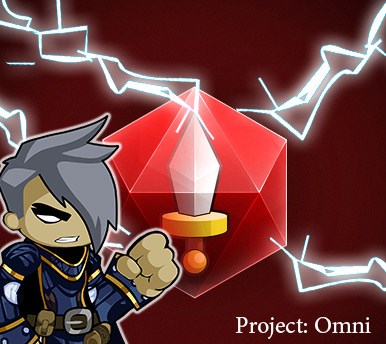 "Would a SwordGem of any other name not slice as sweet?"

For the past week we have been talking about our first Omni-Game. It is a fun and addictive fantasy puzzle game which will play on your phone, tablet, web browser, toaster, and more. It does not have a name yet... but it does have shiny gems including the Sword Gem pictured above. What would surprise you, is the insane history of how that gem came to be. It started as a hastefully drawn circle I made when showing the team the game board. But it needed an icon to be more easily itentifiable as a sword attack gem. So Samba drew the sword icon. Then she penciled some various shapes around it. Meanwhile, Jemini created a bunch of shiny orbs. She was out of the lab, so based on a screenshot of her orbs, Cysero re-created them. Yergen then took the shiny orbs and started modifying them to match the colors of the game board. He thought making each playing piece in a different shape would really help players with color blindness. So he crafted a dozen different shape concepts until we all finally agreed on this hexagon crystal shape for the sword gem. He gave the other gems their own shapes. This was important, because until this moment they were all orbs... now the game pieces are gems. Possibly changing the name of the game. (If we had one. Which we do not.) Finally, Draven took Yergen's gems (which were created in Flash) and recreated them in Photoshop as you can see in the image above. So when you finally get to play this game... run your finger along the Sword Gems to launch your devastating attack, you will be one of the few who knows all the love and effort that went into creating it. We love you little Sword Gem. Now... ATTACK!
ok
Sorry Comments are now closed for this post.

Kazuma: How about "Blade of the Radiant Jewel?" or "Crystal of Blades"? Personally, I like the sound of "crystal" better than "gem"... Also, are you going to do different gems for other weapons or skills, such as pyramids, cubes, pentagonal prisms, etc? On an unrelated note, I find myself liking the word "blade" better than "sword" for some reason. It it just me? Reply  Posted on 5/22/2013 11:20 AM
Delete  Reply

Alroc: When I eventually play this game (which I totally will) this will genuinely make me feel cooler about using the attack gem and the various other gems in the game :) This is why I love AE Reply  Posted on 5/22/2013 11:21 AM
Delete  Reply

YamiKakyuu: Awesome you guys made sure players who are colorblind wouldnt have issues. Thats something I never thought of. Reply  Posted on 5/22/2013 11:21 AM
Delete  Reply

solius: throw an amazingly powerful and devistating spell attack in there as well guys! Reply  Posted on 5/22/2013 11:21 AM
Delete  Reply

Slidey6: I'm so sad. I mainly posted this because no had any comments posted yet when I started, and then in the time it took me to post, seven people commented. D: I'm not special! Whyyyyyyyyyyyyyyyyyyyy? Posted on 5/22/2013 11:21 AM

HangmanSwingset: I agree with Atherionus. I'd rather the game have a combat system more similar to those in the AQ series than that of Pony vs. Pony. It would definitely be much easier to get into the game that way. Reply  Posted on 5/22/2013 1:53 PM
Delete  Reply

Gaara_soulsociety: The battle system will be equal to the Oversoul, you will have to wait for their turn to attack? Or is free of attacks similar in AQWorlds? Please REply, Artix!! Reply  Posted on 5/22/2013 6:38 PM
Delete  Reply

Relaxbleu: i love it let me know when readey to launc and make it pls capable for all phones and also laptops :D u wil i know should be fun to have ur attacs as a sort of gem pets :D Reply  Posted on 5/24/2013 1:15 PM
Delete  Reply