The picture above is the Necromancer armor for our new mobile game Project: Omni.I am looking forward to posting more about the game and its monsters, but first... we need to update you on all the things happening here at the lab! DEPLOY THE BULLET POINTS! 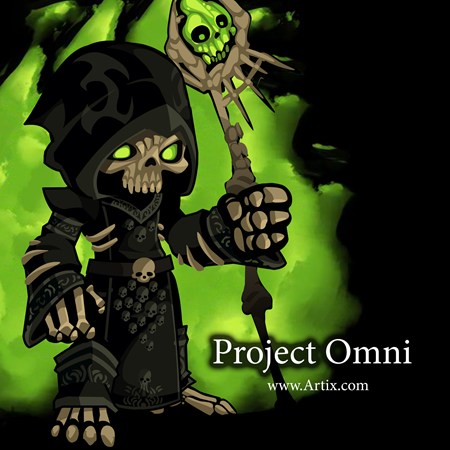 AdventureQuest Worlds
AQWorlds is getting ready for "The Summer of Evil." The popular artist Nulgath will be featured in this week's artist shop starting wednesday. Then, in just a few eeeks the Summer of Evil will kick off with the first GRIMSKULL DUNGEON. I do not know if you have been listening to the rumors about Grimskull, but... his dungeons are evil, evil, evil, evil, evil... evil x 9999. No matter how deadly his first dungeon, "The Vault of Endless Doom" is, adventurers cannot pass up the opportunity to try to reach the bottom and obtain what is guarenteed to be "The most powerful weapon in the world." (With matching enchancement.) The weapon and most everything about the vault is free. The heavy focus on gameplay is part of AQWorld's commitment to "put the game back into the game."
AdventureQuest 3D: Legend of Lore
There is a new alpha test scheduled for this Thursday. While the coders are working on project Omni, the AQ3D content team is going to preview some of the new areas that they have been working on. In this Thursday's test, players will enter the cathedral. We will leave the servers up as long as possible.

MechQuest
We are all in eager anticipation of the "End of the Universe." It is the finale of our giant robot battling game's main storyline. Since it was announced, the MechQuest team paused weekly releases and have been working on preparing the 4-part finale for the hard core fans. The final part is much bigger than the releases we normally make and requires help from the other teams. We expect "The End of the Universe" to begin at the start of summer... possibly in two weeks!!!

YamiKakyuu: Ok I dont think Im allowed to say this but the Necromancer is adorable <3. *Dodges attack from it* Very much looking forward to the next AQ3D test as they are always fun. Also love the updated icons you and Beleen have for this site, matches the style better. Reply  Posted on 5/20/2013 5:54 PM
Delete  Reply

Eonaleth: Would love to see you make a video showing yourself reading fan mail. Have missed your videos a lot. Reply  Posted on 5/20/2013 6:40 PM
Delete  Reply

Archae: As for the video, it depends on how much you want to mesh your life with your job. If you want people to eventually start finding out your first name and randomly striking up conversations with you in supermarkets, including "why haven't you looked at my ideas more" conversations, then use your real self in the videos. Otherwise might want to wear an Artix helmet or something. Reply  Posted on 5/20/2013 8:23 PM
Delete  Reply

JeffTechnoWiz: Mmm what I don't understand is. If you guys couldn't do Import Character Data for AQW. Which would of bought art from AQCLassic/DF/MQ/Whatever. Which would of been a LOT of drawing. How is Project Omni any different? It going to be a "AE Games on ALL Devices" How are the two any more different? Let alone in terms of how much work you have to do? Reply  Posted on 5/20/2013 9:11 PM
Delete  Reply

Artix: "Import Character Data" was an amazing and ambitious idea that was curb stomped by complexity, hackers and the short commings of our dramatically behind schedule portal. By the time we were able to finally do it, it was no longer relevant to AQWorlds since the games had fragmented so dramatically. Posted on 5/20/2013 9:11 PM

JeffTechnoWiz: So isn't this "dramatically behind schedule portal" still here? Isn't that why AQ3D been put on hold for now?And isn't it due to being under staffed? D: Posted on 5/20/2013 9:11 PM

Artix: Omni means... everything :-) So it will be playable on the web, mobile devices and toasters! ("Toasters" is a joke that happened in the community.. it sorta means anything that can run the game.) Posted on 5/20/2013 9:29 PM

Colossus: Looks like some amazing stuff is coming up but I especially like how AQW is moving back into making changes to the gameplay elements and hopefully enhancing the overall experience greatly. Looking forward to the next alpha test and I hope that it will be fruitful to testing whatever new functionality(s) are available. :) Reply  Posted on 5/21/2013 2:37 AM
Delete  Reply

Zhing: Really like the new Mia song :) Bring her back!! Project Omni looks especially flippin' awesome as well :) But I can't wait for the AQ3D alpha test!! You guys just keep getting better and better! Reply  Posted on 5/21/2013 8:51 AM
Delete  Reply

Relenam: I loved the part where you said, "(With matching enchancement.)" Now, that's probably a typo... But it sounds like enchantment and enhancement! It's an enchanted enhancement! An enchancement! :D I want that! You should make that real! Reply  Posted on 5/21/2013 9:24 AM
Delete  Reply

Red_Moglinjester: Rumors of Grimskull - his dungeons are evil, evil, evil, evil, evil... evil x 9999. No matter how deadly his first dungeon, "The Vault of Endless Doom" is, adventurers cannot pass up the opportunity to try to reach the bottom and obtain what is guarenteed to be "The most powerful weapon in the world." (and it makes me think that this would be an EPIC game :DD) Reply  Posted on 5/22/2013 11:31 AM
Delete  Reply

christoria the champion: I have a kindle fire which I think runs on something similar to the anroid market, will Omni be playable on that Reply  Posted on 5/22/2013 11:31 AM
Delete  Reply