Do you love to draw? Drawing characters concepts is probably the most fun part of any video game project. All you need to know is, "How big are they allowed to be?" Then you can go wild...  drawing and experimenting with all sorts of different art styles. For the new <name not decided on yet> project we are building, we are building a hyper animated and highly addictive fantasy combat puzzle game. 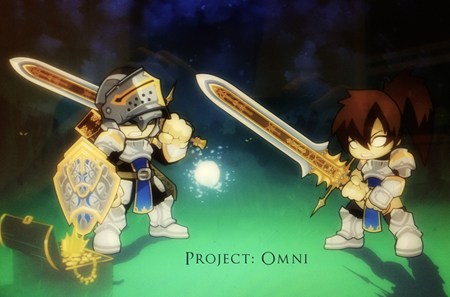 (I took this photo off an artist's screen with my phone. You can see my hands!)
Our characters will be battling monsters in a pretty small area at the top of the screen. So we made them small, boxy, and the heads are a little bigger so you can see their expression. We are planning on changing the expression of the characters when they attack and are hit. Something we have always wanted to do! Surpsingly, these little character have more moving parts than our AdventureQuest Worlds characters. However, and this may shock you... this game prototype will have NO GRAPHICS LAG.  If you are an AQWorlds player you are probably thinking, "IMPOSSIBRUUUUU!!!!!!" -- or something like that. To understand why our new games will probably not have any noticable graphics lag, it is important to understand how the characters are developed. 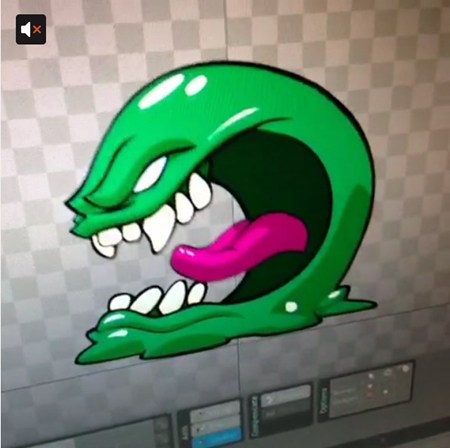 A Tale of Two Characters

In the past, we drew the entire video game character directly inside Flash. Each part of the body was drawn on a seperate layer. Then, we animated the parts to make the character move. If we needed to change the weapon, we simply changed the art in the weapon layer. Flash is pretty neat, because it let us put animations inside animations inside animations inside (repeat forever.) That is why there are swords with lightning that streak down them and pets with ears that wiggle. It comes as a high cost though. All flash art is made out of lines. (This is known as "Vector Art.") Your computer has to redraw those lines every time the object moves. It is like the worlds most sophisticated game of connect the dots. The more complicated a weapon or armor, the harder your computer has to work to draw and fill in all of the lines to create it. Most phones are not powerful enough to handle drawing the insane number of lines for just 5 fulled armored, crazy weapon carrying AQWorlds characters. Just think of all the animation happening on the screen! To solve this, we are ditching lines and are now using .PNG images. (This is known as "Raster Art.") The nice thing is that you can make these images work on literally every device. Which is a good move since not many mobile devices support Flash files. It is semi-easy to take our existing flash character pieces and convert/rebuild them to bitmap graphics. Although, our games have way over 150,000+ pieces of art between them at this point (Keep in mind, a single monster is made of 12 pieces.) But you are probably wondering how this applies to our original question, "Why will there not be any graphics lag?" The answer is pretty crazy. Our new games will be sending all of their graphics directly to your device's hardware accellerated GPU (Graphics Processing Unit.) Can you imagine AQWorlds running at 60 frames per second no matter how many characters are on the screen? (Well, within reason... even the almighty GPU has its limits.)
Join me tomorrow and we can talk about character animation & customization.
ok
Sorry Comments are now closed for this post.

Giemel: Im a good designer but i don't think AE will let me draw things for them i see they creation some suck some cool but i could how the same they do, and i think they think that i am such a super low lever artist that even dont know how to draw! Reply  Posted on 5/15/2013 5:06 AM
Delete  Reply

velc: IMPPOOSSIIIBBRRUUUU! no lag must be pretty neatartix say hi to my dog plz for no apparent reason Reply  Posted on 5/15/2013 11:49 AM
Delete  Reply

Menirz: Ahh, its about time online gaming took advantage of GPUs. Mine's been sitting around looking for an exercise that doesnt murder it (I'm looking at you CryENGINE3!) Reply  Posted on 5/15/2013 11:49 AM
Delete  Reply

The Moglin Master: A few posts back you talked about "spray painting" the armor color in AQ3D to make the graphics faster. Would it be beneficial to have other things "spray painted" onto the character, such as facial features? Reply  Posted on 5/15/2013 11:49 AM
Delete  Reply

nulgathslittlefiend: It's great to see a regular post on a game you are creating! It would be awesome if you could find time to continue this. Reply  Posted on 5/15/2013 11:49 AM
Delete  Reply

MondezX: Amazingness!!! Evolution is so fortunate with you guys. I hope you guys make the games grow bigger than their predecessors. I have really high hopes for this project. Reply  Posted on 5/15/2013 11:50 AM
Delete  Reply

Magia Guerriero: finally my gaming computer can compensate for my subpar internet! Reply  Posted on 5/15/2013 11:50 AM
Delete  Reply

Relaxbleu: should be cool to draw for this animation game and a contest realy great i am on it battle relax on this wil be awesome Reply  Posted on 5/15/2013 11:50 AM
Delete  Reply

Damian_N.: did any other aqw players notice the sword the characters in the 1st pic is the sword of hope from the "end of the world" release? Reply  Posted on 5/15/2013 11:50 AM
Delete  Reply

Bogg: Should we expect a new game to appear first or should we start looking out for existing game(s)(AQ or AQW)when the transfer process begins? Reply  Posted on 5/15/2013 11:52 AM
Delete  Reply

Artix: Actually.. we are doing something completely different. We think you will be excitedly surprised. Posted on 5/15/2013 11:52 AM

GriffinFire: Any chance we could skip the whole "sexy female armour" thing here? Please? It's a little sick with these childlike character designs. Reply  Posted on 5/15/2013 10:55 PM
Delete  Reply

Hurricane150: awesome, but will this be free downloadable? or we have to pay for it?.. and no lag is awesome! when I play AQWorlds on the computer, it laaags sooo muuuch, now i'm happy that now it won't lag. Reply  Posted on 5/16/2013 10:53 AM
Delete  Reply