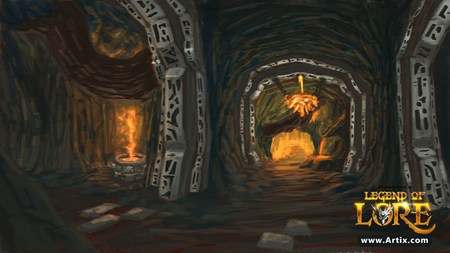 As a 2D video game studio making its first foray into the 3rd dimension, we have certainly been climbing our way up the learning curve. It continues to be challenging and fun. This week we built a volcano dungeon with some wicked looking pouring lava and a pixel shader which gives the illusion that the boiling hot magma is rippling like water under a waterfall. 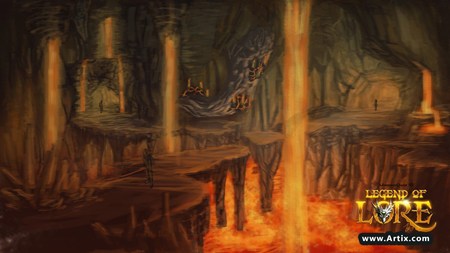 Samba is animating the half-dragon creature known as the Dravir. There are two versions. A wild feral version and a noble warrior-knight version. Meanwhile, heavy work has been going on under the hood of our 3D game engine. We have equippable armor, capes, boots, gloves, belts, and unique multiple styles of each working for our characters. Next week, Korin will be animating the extra pieces... so, you know, you can have cool fluttering capes while you run around and do jump spin attacks on monsters. There are an extremely large number of small detailed challenges our programmers Minimal and Zhoom are solving. And I mean, literally, solving them right now as I type this. Things that most people would never think a game developer would ever have to take time on. For example, when any player in the room changes a piece of armor, there is a tiny blip of lag. The reason for this is the real-time compositing of a character's texture takes a short, but intensive moment for a computer to process. To fix this, they created this really inventive queue system so the game spaces out when it attempts to change someones armor. It is almost ready. Which brings me to... OUR NEXT ALPHA TEST! We are aiming for mid-next week. The purpose of Alpha Test .004 will be to test equipping different pieces of armor on your characters.  Maybe battling in a Volcano. Check back often for more news about the next Alpha Test. 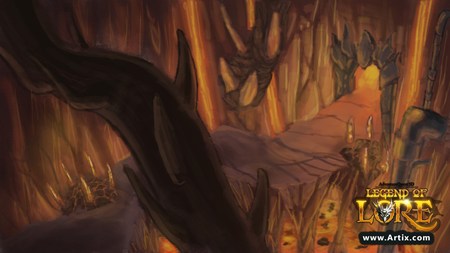 UPDATE: Zhoom just ran the database query to give everyone who obtained Gems in the last test their Alpha Points! You can earn more Alpha Points by participating in the next text.

Ultimumlord: Can't wait. So did you guys change anything in the opening map. like entering house and smoothing the edges of the house? Reply  Posted on 3/29/2013 5:21 PM
Delete  Reply

velc: O...M...G...B...B...Q wow you guys just keep cranking out new things. Its amazing how such a small number of individuals can be so amazing I can't wait. You guys are awesome my dream is to meet you guys in real life and in-game if I do that my life would be infinitely better. you're my Idols like how giving and caring of you. Reply  Posted on 3/29/2013 5:34 PM
Delete  Reply

Relaxbleu: realy very omega cool and i ll be there with testing hope only it wil be on the end of the week coz in the midweek i am traveling back to holland and thn chance tht i sitting in airplane but still great let me know when next test is and hope the servers stay thn some long open: battle and desighn relax on realy universially great work u all deliver :) Reply  Posted on 3/29/2013 5:57 PM
Delete  Reply

velc: Dravir? do you mean like in dragonfable yeaaa another sign that dragonfable still is important Reply  Posted on 3/30/2013 12:48 AM
Delete  Reply

Legionpony: AHHHHHHHHHHHHHHHHHHILOVETHISGAME...AND WILL THERE BE STILL THE MONSTER THAT DROPS BLINDING LIGHT OF DESTINY!?!?!?!?!?!?! Reply  Posted on 3/30/2013 2:48 AM
Delete  Reply

Legendium: Nooooooo! I won't be here for the test! *sobs* At any rate, good job AE. When it comes to getting better, you get better at an exponential rate. Reply  Posted on 3/30/2013 7:16 AM
Delete  Reply

RubyCrystalRose: Could you have the test last longer than the last one's? Like a day? I'd like to able to be a part of the test without being restricted with time zones and all Reply  Posted on 3/30/2013 8:47 AM
Delete  Reply

sonicanees: it would be great if aq3d had quest`s where you would be teleported to do the quest and beat the boss! Artix you are doing a great job on aq3d Reply  Posted on 3/30/2013 4:23 PM
Delete  Reply

jakemaster1390: OMG. You guys keep cranking out the good stuff. No wonder why I am so proud to be a loyal supporter of all AE games. I find now that if I try to play other online games that they now bore me. One I was playing recently and it was nothing but mindless. Keep up the good work. Reply  Posted on 3/31/2013 4:57 PM
Delete  Reply

Shaxi: When can i participate in this release i always miss them? If someone finds out exact release date will you let me know Reply  Posted on 4/2/2013 3:29 PM
Delete  Reply

Relaxbleu: i like how its looking but waiting to be in testing to be helping u guys by checking and smashing bugs and lag's i am in and battle and desighn on and have a nice day Reply  Posted on 4/5/2013 3:52 PM
Delete  Reply

Just_Greg: i was wondering if you guys could release a download version of the game if ever possible. Reply  Posted on 4/8/2013 11:48 AM
Delete  Reply

MantaAbyssus: I think that will be pretty convenient, but then the file size is something that is relatively worrying though. :/ Posted on 4/8/2013 11:48 AM