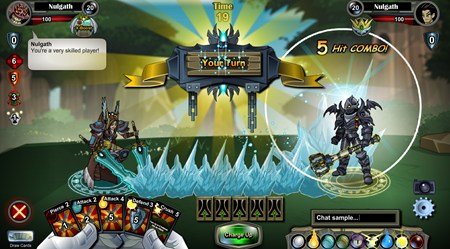 It has been 4 months since Halloween night, when Oversoul's public beta started. Since, the game has been haunted by a never ending plague of weird and complex problems. Rumors are whispered that the game itself may be cursed. Which... is sorta awesome and exactly the type of game I am interested in playing. But there is one major problem that is not supernatural in nature: The card gameplay is confusing and hard to play. That is why Nulgath, Warlic, Rolith and I reviewed all of the comments you posted over the past few months and are making HUGE improvements across the game. The card game battle interface is being re-designed. New card art, in-battle chat, and "intelligent & responsive game design" which will make this card game easier and more fun to play. Warlic is nearly fininshed completely recoding the battle system -- which which make it easier to add new types of cards and solves "unsolvable bugs" like the absorption bug. There will be no game update this week as the team is aiming to release as much of the new Oversoul interface as possible next week. (Meanwhile, the curse watches... lingering... waiting for the best moment to strike.)

QUESTION: Are you going to try out the new Oversoul once the new interface goes live?

Eonaleth: I'm willing to give it a try once it's redone. I've been so focused on other stuff I haven't had time to play the other AE games. I'm just trying to take it one day at a time and not stress the little stuff. Reply  Posted on 3/28/2013 11:47 AM
Delete  Reply

Brisingr: Definitely be going to be trying it out. I've loved it since the Alpha tests. It was certainly a grand idea. And now it is becoming even more grand. If things look anywhere near as nice as the picture above...this game will continue to grow even more than it already currently is! Reply  Posted on 3/28/2013 11:47 AM
Delete  Reply

Tonemaro: I'm definitely going to try out the new Oversoul. I've been with the game since the alpha, and although I'm not a huge fan of how soulgem-centric it is, it definitely is fun, casual game to play. In the meantime, I was wondering if there are ever going to be verification characters ingame, such as a Dragonlord fire-element character. I'm a fan of reciprocity, so I was wondering if verification stuff was ever going to be implemented. Reply  Posted on 3/28/2013 12:26 PM
Delete  Reply

ben14715: This new (1st person) View makes the game look kinda like the original Yu-Gi-OH! series. By the way the elemental advantages have been added yet and you should give the choose you of keeping your soul neutral or keeping into a certain element, which in turn would have exp and power increase and decrease for certain soul elements outside the already in-play character elemental system. Reply  Posted on 3/28/2013 4:14 PM
Delete  Reply

jakemaster1390: Way Awesome. I am definitely going to try out the new interface. Been with this game since alpha and I like how the cards are bigger. Makes it quicker to play when the cards are bigger and the pics are more recognizable. Also I like that the cards look like almost any game cards in the real world, makes it look more like the aq card game and I love those designs. I also love the element symbols instead of the colours for charge up. I have mistakenly charged up the wrong element a few times due to a colour confusion. All in all These changes look amazing and if it helps you people in the long run to solve the unsolvable bugs then my hat off to you. Reply  Posted on 3/28/2013 5:58 PM
Delete  Reply

bossofmagic: I'm definitely going to try the ne winterface to see what's new and what's improved. I don't know how I feel about the hands holding your cards though. Perhaps it would be nice if it could be togglable? Reply  Posted on 3/28/2013 6:55 PM
Delete  Reply

MondezX: From stress to now, this will be a big improvement to the UI plus it'll fix and stabilize compared to the old engine then after this shall be CC!!! Reply  Posted on 3/28/2013 7:03 PM
Delete  Reply

Withered: OK Artix, I tried to make the minecraft character... But ran into problems. I was attacked by HEROBRINE IN MY GAME WHILE I WAS MAKING IT. Reply  Posted on 3/28/2013 8:35 PM
Delete  Reply

Cryptos2600: Of course! Why wouldn't anyone try something so radtastic like this! The battle inteface looking good so far. But, I have to disagree with the "Level your character level your enemy system" it makes battles boring and hard to win sometimes for example: If you maxed your level would you want your enemy to max their level, too? It would take forever to beat them! I know I've said this before, but I think its worth repeating for a better OverSoul :) Meant no offense in this post and I really want to let the OverSoul staff to be proud of themselves for making a great and wonderful game :D Reply  Posted on 3/28/2013 8:43 PM
Delete  Reply

Whs123: I might join in the release but as soon as that ever promised card customization comes out to i mean that has been promised for weeks and all we get is more characters ( the rolith shop being a test is ok but still) Reply  Posted on 3/29/2013 12:20 AM
Delete  Reply

Elite_Chaotic_Ninja: I will DEFINITELY try the new oversoul! P.S. Can we talk account issues some time? Reply  Posted on 3/29/2013 9:07 AM
Delete  Reply

MakaiHunter.: aw btw Can you show a full circle during battle? it was very helpful OSWiki, to get a photo with good quality Reply  Posted on 3/31/2013 10:30 AM
Delete  Reply

Nyan: We all will try out the new Oversoul, since we are your humble servants Nulgath, Warlic, and Rolith! Reply  Posted on 3/31/2013 8:11 PM
Delete  Reply

Shish: The hands are awesome but I feel like this update will cause way more lag than before Reply  Posted on 4/3/2013 11:40 AM
Delete  Reply