Orcs and Ogres find refuge in OverSoul! Can you capture and master the Ogre Shaman, the Ogre Maiden, and the Orc Savage? You can also unlock the Pactonal Captain from the shop… but how it’s unlocked is determined by your lifetime of Soul Gems… 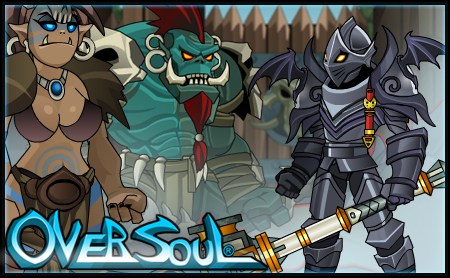 Get ready for 3 feet of 2D fury in 1 ring to battle them all! The stars of Hulk Hogan’s Micro Wrestling league duke it out in the Battleon Coliseum during this special Dwarves versus Giants event. Explore the newly redesigned Battleon town and gear up in the exclusive DragonClaw Armor set—only available for a limited time! Then test your luck in 7 Shamrock Fair Minigames, win Lucky Day Seasonal Rares, and permanent Lucky Day RARES: the Guardian o' Sláinte Armor set. ShamRock n’ roll all weekend long! 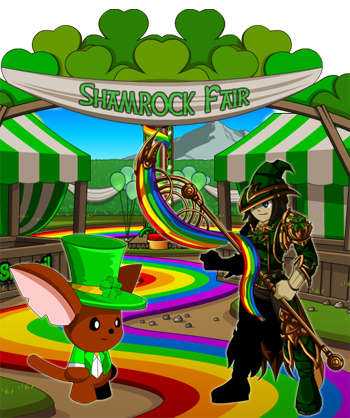 Spring into action: the Spring Event has begun! Botanical Battlegear goes live with the 10,000 Varium package, and comes with 2 mutating weapons plus an exclusive core: Growth Serum. Seasonal rare Spring Event weapons have also returned, so speak with Charfade, Naomi, and Valestra (in Frysteland) to get them! Now that Spring is here, the Winter / Frysteland rares will be leaving until next year. The missions and Heartbreaker / Azrael weapons will remain a bit longer to let everyone participate in the epic clash against the Elite Yeti! 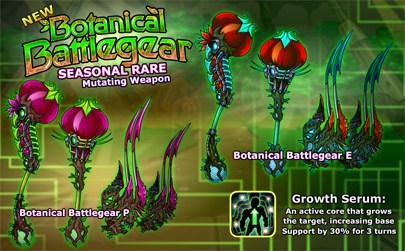 This weekend is the Lucky Day celebration! The Lucky Day Storybook is now live in your Book of Lore for you to replay through past years celebrations. New additions to Lucky Day include a quest and a treasure hunt so that we can continue with Sulen'Eska next week. Dracelix has made some amazing things for you to hunt down! Feelin’ lucky? Turn your Fable into Reality! 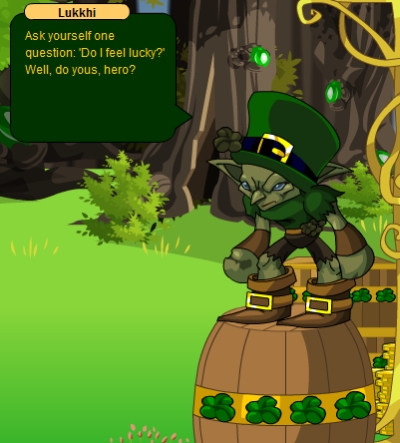 Accidents have been happening all over Lore, as if someone had drained all the luck from the world. Leprechauns do not seem to be immune to the effects either. The scheming banker Uncle Sham is now in danger of losing his kingdom and now seeks the help of the bravest of Lore's heroes! Battle on in the 2013 Blarney War! 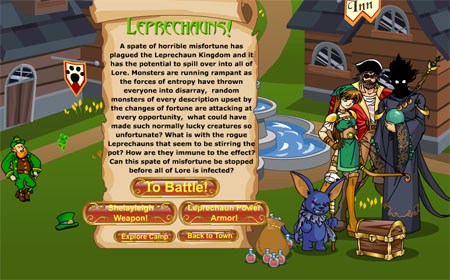 oreo876: The only thing i have to say is in AQW the last cutscene of the new dwarf event shows blixx and meatball on your side. But you just fought them because they were traitors. Why? Reply  Posted on 3/15/2013 9:38 PM
Delete  Reply

kabimarta1: Love the new AQW release! Hunting down the Chaos Beasts to fill the museum with statues in their likeliness was fun, in my opinion. Reply  Posted on 3/15/2013 9:38 PM
Delete  Reply

Colossus: I'm glad the Alpha Test went smoothly and the game seems to be progressing well. I just suddenly realized how much potential is unused in the AQW Battle Bar. My recommendation would be to add links to Artix.com, the Portal, Lorepedia, Artix Wallpapers and other AE games to name a few. It would become a lot more of a useful tool to navigate the games and content that AE introduces rather than just a button I press when I'm too lazy to type the six characters "aq.com". Just a suggestion. Reply  Posted on 3/16/2013 3:56 AM
Delete  Reply

velc: Huh dragonfable Got a Review but MQ did'nt did MQ even get an update love everything Keep up the good work guys Reply  Posted on 3/16/2013 6:08 PM
Delete  Reply

velc: Wow I know OS is a bit geared for older people but that picture is um a bit well yeah REVEALING cut back a bit please Reply  Posted on 3/16/2013 9:36 PM
Delete  Reply

Cryptos2600: I really liked the AQWorlds release, but I have to say different to Oversoul's battle system leveling your character will level your enemy, too. Which makes battles boring. Let suggest if you guys leveled too level 99 would you like your enemy to be level 99 too it would be like forever to beat them -_- Reply  Posted on 3/18/2013 1:29 AM
Delete  Reply

Relaxbleu: mine drawed pictures from artix and twilly and landscape and wolves Posted on 3/18/2013 8:51 PM