The answer is "Violence! Lots and lots of Violence!" But what is the question? Oh, the question was "How can a goodie two-shoes like Artix throw the best bachelor's party ever for Rolith without breaking his life-long PG-13 honor code?" You probably think we are talking about the highly anticipated new Valentines-themed event in DragonFable... but in fact, we are talking about the actual, real life, Bachelor Party featuring WWE Hall of Famers, Midget Wrestlers from TruTV, and sword swinging bridesmades that inspired it. 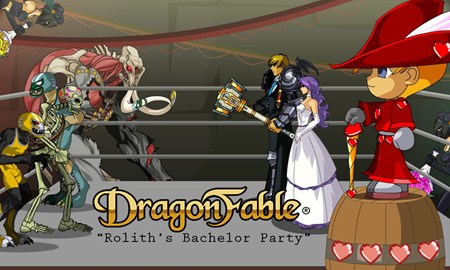 Hit 'read more' for the full story of Rolith's Bachelor party (with pictures as promised!) then play the new release inspired by it in DragonFable this weekend!

A match made in DragonFable (Lover's Backstory)

If you know the gamers love story of Rolith and Alina, feel free to skip on to the main event. But if you are new to our gaming community here at Artix Entertainment, then you may become inspired at the tale of these two Artix Entertainment game developers who fell madly in love. Rolith is a programmer and Alina was a writer for our web-based fantasy game, DragonFable. They expressed their feelings for each other and became a couple at the convention, DraconCon. Uncertain if it was against AE policy to date a co-worker, they tried to keep it a secret. *laughs* EVERYONE on the staff knew they were going to end up together at least a year before. The real shocker was what happened at the following year's DragonCon. Rolith proposed both in real life AND in a special in-game proposal (spoofing the popular old-spice commercial.) 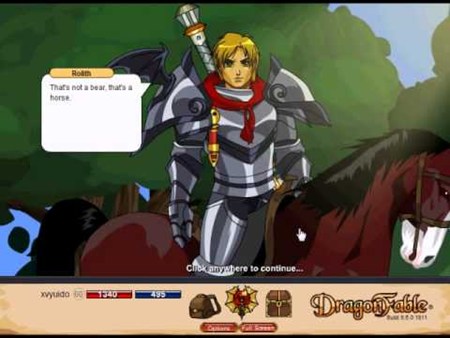 It was an extreme honor that Rolith asked me to be his best man.  They were married the next year in front of all of us that supported them... which of course meant they were married in real life, and in a special AQWorlds game event. The decision to marry them in AQWorlds turned out to be controversial, as players of the game DragonFable believed they should be married in their game. An issue this weekend's special release should more than remedy! 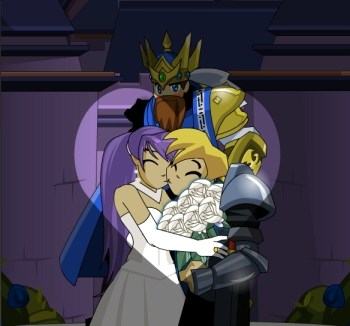 Someone at the office said, "Weird, the radio said there were a bunch of wrestlers in town for some 'unspecified' event this morning, I wonder what is going on."

Rolith had been worried for about a month straight. As best man I would be throwing his Bachelor Party. That last hurrah of being a single, free man before getting married. Normally these kind of parties are the things that you could not write about on the Design Notes -- but seriously, this is me we are talking about. Rolith knew I did not drink, nor smoke, nor do drugs, nor participate in anything innappropriate. (To most people "The worst Best Man choice ever.") So, by process of elimination, Rolith got the idea that his last night as a single man would be spent trying not to loose teeth, go to the hospital, or to the morgue. Alina met with me privately and made me promise that Rolith would not be missing any noticeable body parts for the wedding. You know, for the sake of the pictures. I said, "Promise, I will do my best."

After work, all of the "BACHELOR MANLY MAN SQUAD" formed up at my home: Rolith, his brothers and friends including Warlic, Cysero, Zhoom, Dage, Stryche, Roam, Galanoth and myself. I put on a cheesy Japanese monster wrestling movie called "Calamari Wrestler" -- which was actually about a giant squid who wrestled -- and frankly, Rolith was sorta hoping that was going to be the highlight of the night. I told him to pay attention, it would be relevant.

Then, we were picked up by a black vehicle and taken quite a distance away to a dimly lit industrial park. Light was only coming from a door in one building... we told Rolith that he had to go in first.

Rolith walked in and was confronted with the full force of Hulk Hogan's Micro-Champtionship Wrestlers (MCW). Managed and led by former WWF wrestler Johnny G, the MCW crew had a show following their adventures on the TruTV channel.  Everyone knew Rolith on sight and rushed to greet him, congratulate him and introduce themselves.

The warehouse was normally home to an ice skating ring, but this night it was huge and empty except for a full size wrestling ring, a set of bleachers, and us. Johnny G stood in the ring with his microphone and one-by-one announced his MCW wrestlers as they made their intros including Samson, Blixx, Meatball, Demo, and others who were new and not on their TV show. Keep in mind, this was not a public event... this whole happening was just for Rolith. 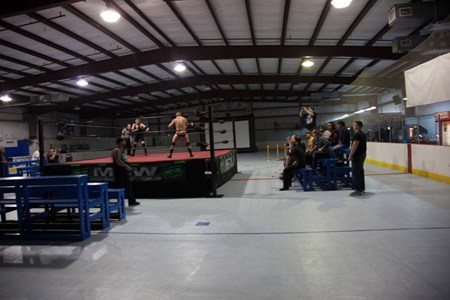 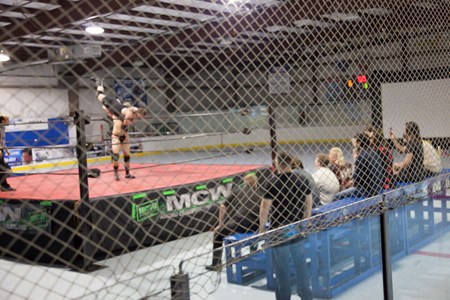 (This is a photo from the Bachelor Party)

Johnny G announced WWE Hall of Famer Brutus the Barber Beefcake! Brutus was a famous wrestler from the '80s who carried giant shears. When he won a match, he would use the shears to cut off his opponents hair. He walked in, posed for a bit, walked up to Rolith, shook his hand, congratulated him, then saw me sitting next to him... grabbed me by the collar and threw me across the ring and took my seat next to Rolith.

Johnny G announced Nasty Boys' own Brian Knobbs. If you are not familiar with the Nasty Boys, they were tag team champions with a history of not... um.. being the good guys. Even though he had injured his leg and walked in on a single cruch, he grabbed the guy sitting on the other side of Rolith, threw him, and took his seat.

Johnny G announced that Rolith needed a manager! Who better to manage Rolith than Hulk Hogan's former Manager, Jimmy "The Mouth of the South" Hart! Sure enough, he came in wearing his eccentric red coat and screaming into his iconic bullhorn.

I am sure you guessed by now... Rolith is a huge fan of wrestling. You cannot imagine the look of shock and wide smile on his face as all of this is going on. All of our favorite part is how everyone focused on Rolith... as the fights started they dedicated their matches to him. He was king... actually.. more like a Champion.

A cake was wheeled out. It was an abnormally large cake. MCW female wrestler Jersey Jess popped out of the cake (fully dressed!) holding a Championship Wrestling Belt & A special wrestling outfit for Rolith. The wrestling outfit was a "onesie"... you know, one of those one-piece outfits. With the help of Mido's wife a giant Ban Hammer (Rolith's weapon) was embroidered onto the front of it. 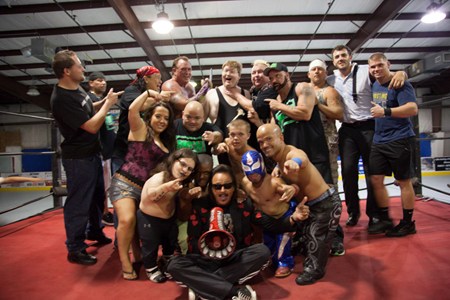 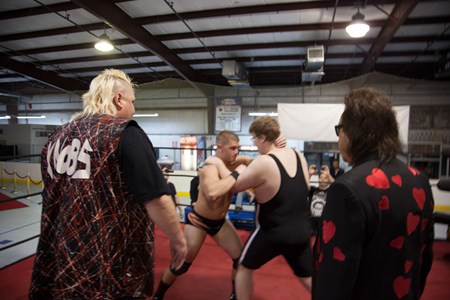 Instructed by Tanaka, Knobbs, and Brutus the Barber Beefcake... and in front of all of his best friends... Rolith got his first lesson in Wrestling. 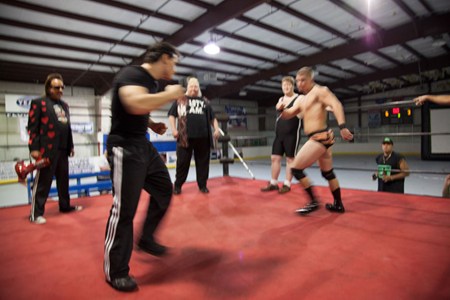 (Rolith was not the only one to learn "the ropes". I got to hop in the ring too!)

Rolith and our group learned how to take a bump, handle the rope, lock up, and more. Dage, being the youngest and most (I need a word that means if you bend someones spine that much they still do not care and just sorta bounce back up)... well, he took a lot of killer body slams... then DEMANDED more!  (Bonus Story: During the training, Brutus the Barber Beefcake's really expensive glasses fell in the ring and we accidentally broke them.) 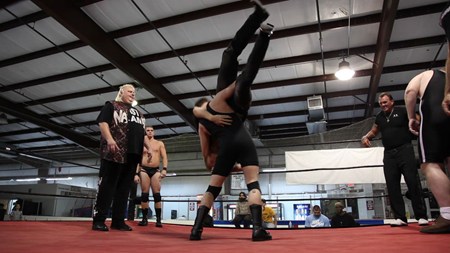 Rolith had the time of his life! Any injuries he may have suffered from the event will be our secret. (So Alina does not beat ME up.) The final match of the night featured a new upcoming wrestler known as "The Lawyer." He is pretty amazing and I would not be surprised if he makes his way to being a prominent wrestler soon. The most amazing thing, was even though we were such a small crowd, these guys put on a half dozen matches at 100% energy. It is one thing to perform for a stadium full of people... but they did this for the 8 or so of us. It was unbelievable. 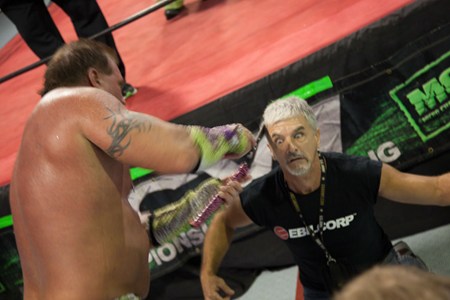 (There were some additional surprises that night... for example, the Chairman showed up... and left with a little haircut, via Brutus the Barber Beefcake, HAHA!)
Rolith did ask, "This was AMAZING! Seriously!? How the heck did you set this up?" I put my hand on his shoulder and told him, "Awww, I would do this for anyone who dedicated their entire life to my game studio, met and married the love of his life here, and still takes my calls at 3am in the morning, when I am being spawn camped in some MMO, and need a friend I can rely on to save me. By the way, can I post pictures of you in that onsie?" Rolith replied, "NO." 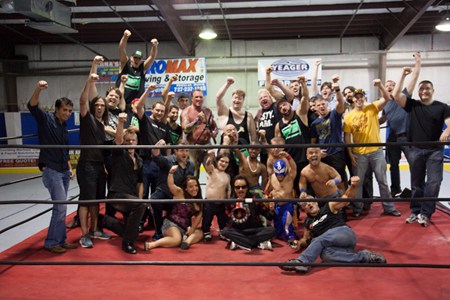 I hope you enjoyed the story and photos. This was one of those pretty special one-in-a-life-time events. One of the things I love about our community is that we can share things like this with you. I mean, you know we do not look like our characters in real life, and you are not the sort of person to judge us or make hurtful comments. I just hope the next time we do something this fun and crazy -- that you are a part of it!

(Note: The wrestlers were replaced by Undead to protect the Wrestlers)