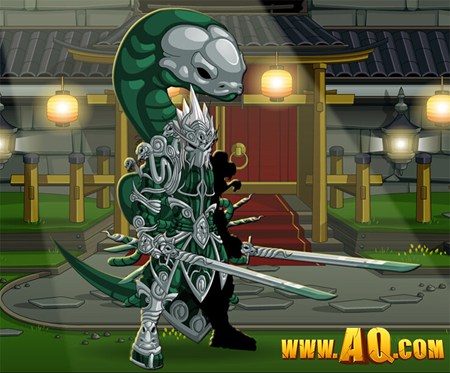 A full out, high sprint lab around the Secret Underground Lab revealed the following things...

EbilCorp's Chairman Platinum out of work.. and on TV!?
Those of you familiar with Chairman Platinum, EbilCorp's former evil ruler, might get a chuckle if you watch tonight's episode of "The Guiness Book of World Records Gone Wild!" on TruTV. Apparently he hung up his suit, assumed someone elses identity, and is trying to break a world record? (UPDATE: His segement did not appear on last night's episode. Very likely it will be next week.)

Carvanal begins in AQWorlds tomorrow!
This is going to be pretty cool... check out the design notes for the whole scoop.

EpicDuel's OMEGA release is officially a HIT!
Epic Duel's servers have been on fire since the release of OMEGA. The team is hard at work fixing a ton of blanacing issues and problems introduced with the release... so my advice to you... PLAY NOW WHILE THINGS ARE STILL OVERPOWERED!

Doom Cauldron
Warlic finished assembling the first puzzle challenge of our test mobile game. It is working pretty nice! If we get time to work on it this weekend, we should be finishing it up soon.

Beleen's Hola Hoop
... *sigh* Beleen showed up today with a pink hola hoop and told us all it was her new workout routine. Every hour she goes into the hall between the game rooms and hola hoops.

Check all the game's websites to see what is coming next in them!

JeffTechnoWiz: "Check all the game's websites to see what is coming next in them!" Nopes! Artix.com is suppose to do that! Come on artix. Drink a red bull and get at it please. I know you can do it :D Reply  Posted on 2/7/2013 4:04 PM
Delete  Reply

Lothalis: I will have you know Hoola Hooping is a great way to tone your core and ensure proper alignment of your back...but what alignment is she O_O Reply  Posted on 2/7/2013 4:10 PM
Delete  Reply

Eonaleth: Yay I was actually talking with a friend the other night about IPods and I'm hoping to get one soon. Need to do research because I really want to get DoomCaulderon. Reply  Posted on 2/7/2013 4:20 PM
Delete  Reply

Jayk: Shame i cant see Chairman P on TV since i live in the UK could someone plz video the thing and upload it to youtube? Reply  Posted on 2/7/2013 4:22 PM
Delete  Reply

Glenn: Artix did you get my formula about how to de-pinkify Beleen? I sent you an example through facebook? Reply  Posted on 2/7/2013 4:33 PM
Delete  Reply

velc: De-pinkify Beleen Hahahahahah (Ebil Pinkomaner laugh) .The Only Way you Could Do That Is By Magic Of Course Posted on 2/7/2013 4:33 PM

Glenn: The formula for de-pinkifing something is 3 cups blood from a turnip, 10 tablespoons of liquid lead, 93230 nanoparticles of bone dust, and one molecular inverter found at any planet orbiting a black hole. Sorry I can't post the sample picture I don't know how here. Reply  Posted on 2/7/2013 4:49 PM
Delete  Reply

Entro: in dragonfable, i want to have the timekiller armor in the closet. I have the armor, but i want to save it as my base class from my armor closet. Also, when ever i use the forums it logs me in as guest and i don't know how to log out, so i can't post my bugs and suggestions their. Help? Reply  Posted on 2/7/2013 5:08 PM
Delete  Reply

Legendium: When you go to the forums as a guest, you should see the AE Dragon logo with "forums" written underneath. Right next to it you'll see "Create Artix Account", "View Rules" and "Register on the Forum". Click "Register on the Forum". That should start the process. Or you'll see a different screen with an advert in the corner. On that screen, click login, and then new user. Then you'll be in. Hope this helps. :) Posted on 2/7/2013 5:08 PM

dooooooom lord: Artix, did you ever post the aq3d animation video you said your were going to post on monday? Reply  Posted on 2/7/2013 5:37 PM
Delete  Reply

velc: OMG Chairman P On TV What Has Ebilcorp Done This Time.Reverse The Solution For Everything (Magic) And you Get Ebilcorp. It Is Everythings Problem Methinks Ebilcorp Ninjas Will Help The Chairman Break A Record For Most Ebilness. Reply  Posted on 2/7/2013 6:42 PM
Delete  Reply

dragonmaker: i think you should spray paint that beleen gold or black also everything she pink-ified or put her in charge of poies vs ponies *shudders* Reply  Posted on 2/7/2013 6:44 PM
Delete  Reply

dragonmaker: i did also i however had a shotgun and supulcere made them all black undead after they died Posted on 2/7/2013 6:44 PM

YamiKakyuu: Im sure once the glorious Chairman is done setting his World Record, he will return to EbilCorp and restore its glory! Reply  Posted on 2/7/2013 6:59 PM
Delete  Reply

Damian_N.: Chairman Platinum is going to try to break a world record? I hope it's eating "eat ten spoon full's of pepper. AND HE FAILS! HAHAHAHA I'm still mad about the birthday event. Reply  Posted on 2/7/2013 9:49 PM
Delete  Reply

kabimarta1: At least he got the pie in the face that he deserved for trying to blow up AE's entire game network during said birthday event. LOL! Good times... Posted on 2/7/2013 9:49 PM

kabimarta1: I just looked at the Design Notes, and the nighttime scenery is just beautiful. Can't wait for Carnaval. Reply  Posted on 2/8/2013 1:03 PM
Delete  Reply

Vanitas: Does anyone know, if MechQuest's Finale continues this week? Reply  Posted on 2/9/2013 3:31 PM
Delete  Reply

Colossus: Wow, I'm really starting to dig this Rapid-Fire Update thing. It's been really great so far and as I mentioned before, all this information in one place is great for us gamers to keep in track of what we're looking forward to. Any videos of Beleen's Hola Hoop? I really want to see that... Reply  Posted on 2/9/2013 3:31 PM
Delete  Reply