EpicDuel is our multiplayer PvP game. The upcoming Omega release will change... everything! See EpicDuel's official website for news and rumors about all of the changes coming to the game. 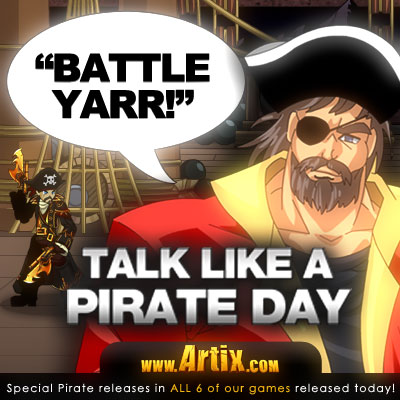 Ahoy, me Hearties! This day be th' day we all ramble like a band 'o swashbucklers. It be "TALK LIKE A PIRATE DAY!" Ta get in the spirit of TLaPD, each of our 6 games is setting to sea with Pirate-Themed Releases - starting taday! If ye be need'n a li'l help with yer scallywag-speak, see the original creator's Talk-Like-A-Day How To page... cause if we see ya in-game and yer not speaking the speak, you'll be walk'n the plank, harr harr. Let me hear your BATTLE Aaaaaaaaaar!

NOTE: For all o' ye tak'n notice. Talk Like a Pirate Day is the ONLY day when Artix is allowed to use contractions.

Every year at this time, two things happen. 1st, Starbucks releases it's Pumpkin Spice Latte. 2nd, the greatest 3-months of releases happen in our video games. It is probably a coincidence. Probably. *sips from cup*

Today, Phase 1 of guilds was released in our fantasy MMO, AdventureQuest Worlds. If you have upgraded, or upgrade to Member, you can now create a guild on the PTR server (our testing server) and start inviting members. This first release is pretty bare bones... but what is really exciting is where the AQWorlds team is going with this. Guilds are going to be able to get their own town, and work together as a guild to level it up and build it into a Kingdom. There will be Guild vs Guild wars (optional - for those of you who like that sort of thing) and tons of new features including special events for your town. Read Alina's posts on the AQWorlds Design Notes for more information.

Unmarried Male Staff Members are the new AE ULTRA RARE! In fact, there are only 3 of us left. This past weekend I flew to Montreal, Canada to attend J6's wedding to the lovely Cinazul (remember her from the ultra cheesy Save Chuckles video?)  For the wedding, J6 asked DragonFable's amazing animator & musician, Ghost, to recompose a special version of DragonFable's main theme to walk down the aisle to.  It was epic. You will get to hear it in the in-game version of J6's wedding coming next week to AQWorlds. J6's story is very special to everyone in the AE community. For those of you who do not know, J6 was original a player of the classic AdventureQuest. We saw his art on the forums and were impressed! He joined the team as a volenteer artist. His skill level grew QUICKLY and over the many years that followed he became one of our greatest and most legendary artists. Definately our #1 background artist. You can see his work everywhere from all of the backgrounds in AQWorlds, MechQuest, and many monsters, armors, and weapons in all of the games. In fact, he is currently the only artist at AE to have worked on every single one of our games! Oh... a funny side story for you (because this will NOT be going in the in-game wedding!). Are you familliar with the part at the end of a wedding, where the girl throws the bouquet and the guy throws the garter. Well, the groom has to get the garter from his now-wife's leg. Imagine this if you will, Cinazul in her fancy wedding dress is sitting on a chair in the center of the room surrounded as the audience watches on. J6 is supposed to get the garter  -- so he pulls out a pair of sunglasses, and the Mission Impossible theme song starts playing. He gets on the ground, rolls over on his back and slides under Cinazul's dress. Everyone laughs... and expects him to pull out the garter. But instead, he pulls out a fake severed leg, a plastic baby, and other crazy objects tossing them on the floor. Cinazul had NO IDEA this was going to happen! (The groomsmen had hid all the props under Cinazul's chair before she sat down. The dress provided perfect cover for the gag. J6 is so creative. It was the funnist thing I have seen in a long time.

On the subject of AQ weddings: Not long ago Dumoose (AQWorlds/HeroSmash) was married. Lussion (AQ3D) also just got married and is on his honeymoon now. Rolith (DF/OverSoul) and Alina (AQWorlds) are going to be married next month and Mido (Artist) will be marrying the girl who made the original Artix cosplay armor in November! It is a pretty happy time here -- but we need to even balance out the ratio or married to single. Maybe we should put up a help wanted ad for single people?

I have been so anxious to tell this story, even if the ending is not the one we wanted. A few weeks ago, I traveled to meet the members of the band Journey and try to talk them into doing an in-game event with us. It was so exciting meeting the band -- especially their new lead singer, Arnel. He has an amazing story  -- he homeless and discovered by the band on YouTube. He was so cool, and even took a picture with the Artix figure I gave him. Upon returning home, the pressure was on to get a formal agreement in place so we could start work on the event for the anniversary event. But with such a tight deadline there was just not enough time to jump through all the management/legal/businessy hoops. (Knew we should have put more points into hoop jumping.)  So, while it is still possible to do an event with Journey or Arnel in the future, we will not be doing it for this Anniversary. *bummer* Alternative Plan 0073.01A has been activated.

Both of the new games we have in development OverSoul and AdventureQuest3D: Legend of LORE have ramped up development. OverSoul went into testing on Thursday. If you have ever upgraded in ANY of our games, you are welcome to login and help test the current phase of the new game. Both of these new games use the Artix Entertainment"ONE LOGIN TO RULE THEM ALL!" - which is the same login that is featured at the top right of this website. Our goal is to eventually have all of the games run on this new, improved, and ultra secure login. Ooooh... and a side note: When AQWorlds is upgraded to use this login, we will finally be able to turn on the name-change feature!

Wednesday is "Talk Like a Pirate Day." For 24 hours ALL of our games will be embracing pirate speak and running special events. Want to brush up on your pirate-ese before the events begin? Read this How To Talk Like a Pirate Guide.

Forum/Twitter/FaceBook Question: Would you like the option to play multiple AE games on a single web page?

It's finally here! The Oversoul Alpha test is LIVE! 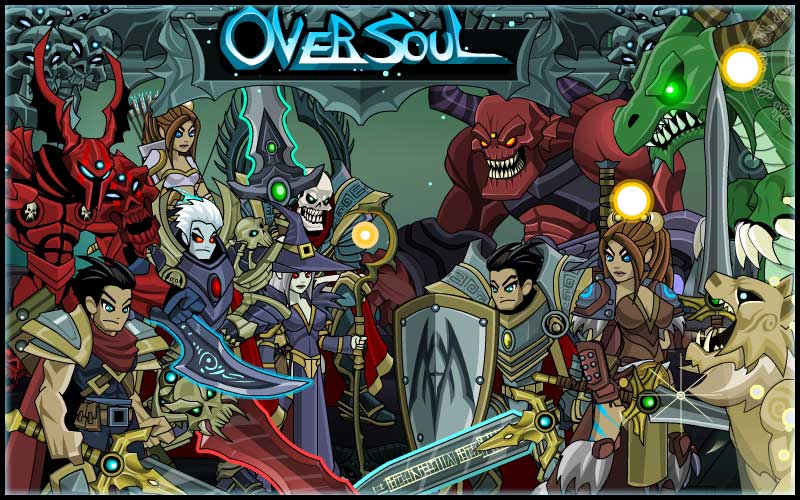 You can play it here: http://devsoul.artix.com/test/Oversoul-bin/

For those of you who haven't been paying attention, Oversoul is a brand new Artix Entertainment game that's been in development for quite some time now. The Oversoul team includes Nulgath, Warlic, Rolith, Revontheus, Klunk, and Dilligaf. If you're a fan of the art and love the game, be sure to say so on facebook or twitter!

Oversoul is a PVPMMORPG unlike any of our other games. The gameplay revolves around using battlecards to battle your opponents, but you can't just use any card, you have to develop real strategies to beat different opponents! Just because you could defeat the last one, doesn't mean you'll defeat the next one. Everyone has their own strengths and weaknesses and it's up to you to discover what they are and build a strategy against them. And don't forget about doing PvE battles. If you want to posess rare monsters, you have to find them, battle them, and win!

This is an early Alpha test of the game, and although nothing is finalized, the feature sets are unfinished, and the game isn't totally stable, we're all very excited to see what you guys think of it... So hurry up and log in so you can comment here and tell us!

Oh and remember, both Stress Testers (those of you who logged in to stress-test the game before today) and Alpha Testers will get their own exclusive characters as a thank you for supporting the game!

Anyone who has supported AE by purchasing a membership or currency in any of our games can play the Alpha! If you think you qualify but you can't log in, please make sure the upgraded account is linked to your master account. You must log in to Oversoul using your master account.

To read regular updates and see sneak peeks of unreleased art and features, be sure to check out Nulgath's posts on the Oversoul game homepage.

Miko, Kraken, and Draven have been busy working on the new artix.com. This includes a totally new design, code, and a bunch of back-end stuff that you guys can't see. As some of you have noticed, there have been bugs. One of the bugs was hiding some people's comments where no one (not even the admins) could see. It's been fixed now. So if you made a comment earlier this week or sometime last week and you don't see it, please post it again. ESPECIALLY if you submitted a contest entry into the AQ3D Monster Design Contest and it hasn't shown up, please please please repost it. If you don't, your entry will be gone forever and no one will ever see it. (What if your lost entry was going to be the winning one??)